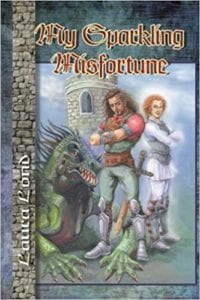 Lord Arkus of Blackriver Castle is a deliciously evil villain. In fact, “evil” is one of his favorite words. And when Prince Kellemar of Dalvanna calls him “despicably wicked,” Arkus considers it flattery. What a nasty, dreadful, and cruel villain Arkus is. Oh, and don’t forget funny. Yes, I said funny! With author Laura Lond’s crisp, wry sense of humor, you’ll be laughing right along with the scoundrel on almost every page.

My Sparkling Misfortune opens with Prince Kellemar coming to Blackriver Castle to strike a deal with Arkus. It seems a local tribe of Dolmanians have been attacking various regions of the Prince’s kingdom. He seeks Arkus’ aid in getting rid of the pesky pillagers, and in return he will allow the villain to help himself to the Dolmanians’ plunder. A deal is struck and on the appointed day, Arkus goes after the booty.

Good Prince Kellemar, however, isn’t really so good. He really wants to become a hero and figures if he causes Arkus’ demise, his wish will be granted. So the “good” prince has a plan that appears fool proof – he tells Arkus of the cave where the Dolmanians’ treasure is hidden. But also in the cave is a lizard-like monster of unfathomable horror. To make matters worse (or better, depending on whose side you’re on), the monster has been hunting Arkus for quite a while. When the monster sees Arkus, the chase is on and the betrayed villain makes a hasty retreat. Arkus barely escapes.

Unable to return to his castle, due to the pursuing monster, Arkus winds up at Silky Lake where he hopes to capture a “gormack,” an evil spirit that might just be the ticket to getting revenge on Kellemar. But instead of capturing a gormack, Arkus mistakenly gets a “sparkling,” a spirit who helps heroes. How could things have gone so wrong? And what on earth will he do with a sparkling? Release it or keep it for several years to bring him his food each day? What a waste of time! But watch out, things are about to get a lot worse for Arkus, a man who prides himself on his wretched evilness.

It was apparent on the first page that this fantasy tale is no ordinary story. Told from the villain’s point of view, we get a taste of the author’s humor on the very first page. “What? You wanted a noble hero? Well, tough. You’ve got the wrong book then….there are no heroes without us villains.” Much of the humor was not from the dialog but from the amusing circumstances that Arkus found himself in over and over. He wanted nothing more than to be a bad guy, but the more he tried, the more he failed.

This isn’t a book where you “love to hate” the villain. Arkus is a nasty guy but he's funny too. You can't help but laugh with him - and at him. Actually, even at the start, when he talks about how he relishes his evil talents, he is a likeable guy. He says he’s evil, that he does terrible things, but we never see it. Instead, we see his rather goofy missteps. The author also did a nice job of developing characters and their relationships. I particularly enjoyed Arkus’ rapport with young Prince Philip, the son of King Osmund, a ruler who is indebted to Arkus for, well, I can’t tell you what happened….

While reading, I was trying to decide if this book is more appropriate for youngsters or adults. I thoroughly enjoyed the tale and suspect some of the humor may go over the heads of young readers. But there is nothing objectionable in the text and it is a funny and fast moving tale that would be a good “read together” story for parents and young fantasy lovers too.

Quill says: Fun, funny, and fast-moving, My Sparkling Misfortune is a fantasy tale not to be missed.