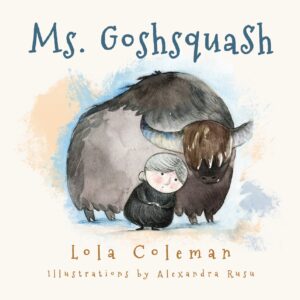 Welcome to the world of Ms. Goshsquash, a magical woman who knows just how to handle all the naughty children who might come her way.

Ms. Goshsquash was a small woman who “...was plump and round, and she always wore black. And she had the most unusual pet Yak.” But her yak wasn’t the only curious thing about Ms. Goshsquash – all the townspeople knew that if a child misbehaved, she was the one who could teach the child the error of their ways.

One day, when Ms. Goshsquash saw three children skipping school, “...she knew it was time for the Goshsquash rule.”

“The three unsuspecting children had no idea how,
But suddenly they found themselves staring at a cow.
They saw a woman and tried to be brave.
They didn’t know it then, but soon they’d learn to behave.”

The three schoolchildren soon found themselves in Ms. Goshsquash’s farmhouse, where she set to work teaching them a lesson they’d never forget. Roscoe was the first one to learn about the Goshsquash Rule. Nervous that something was about to happen, the boy’s knees began to shake. Then, as his two friends looked on, a hole appeared in the floor and Roscoe immediately disappeared into the abyss. Tilda and Billy screamed in disbelief. What just happened?

As his friends tried to figure out what happened, Roscoe suddenly appeared on the wrong side of a mirror. How could that be? But before they had time to figure it out, it was Tilda’s turn to learn about the Goshsquash Rule. Once she was gone behind the mirror, a defiant Billy thought he could outwit the old woman. The boy was stubborn and convinced that he wasn’t really “all that bad.” But he was no match for Ms. Goshsquash.

Ms. Goshsquash is a tale that reminded me of the classic Grimm Fairy Tales, with a magical old woman (a witch, perhaps?) and naughty children who get themselves into trouble. We never learn how Ms. Goshsquash does the magically things she does, but the children learn a very important lesson about how their actions hurt those around them. Stuck inside the mirror, they’re able to see those they tease and bully, and the tears and pain their actions caused. The story is told in rhyme and flows nicely as the story moves along quickly. Finally, the beautiful artwork must be mentioned – the gorgeous watercolor drawings really bring the story to life.

Quill says: Ms. Goshsquash is a fun and quirky story, with beautiful artwork and rhyming text that teaches children how being mean can hurt others.