Mrs. Paddington and the Silver Mousetraps 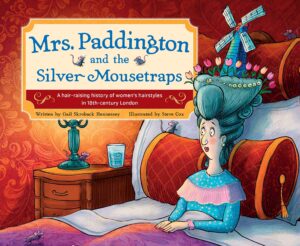 Mrs. Paddington and the Silver Mousetraps

Imagine a hairdo so outlandish that it reaches a height of three feet and is decorated with all sorts of bizarre accoutrements. It’s not fantasy but based on fact and its perfectly recounted in the children's book, Mrs. Paddington and the Silver Mousetraps.

Our story begins with Mrs. Muriel Paddington and her hairdresser, Mrs. Blinkhorn, discussing possible hairstyles for the upcoming Moonlight Ball. The setting is London in the 18th-century, and tall (and I mean tall!) hairstyles are all the rage. And height isn’t the only thing these hairstyles require – they also need a theme, and with that theme, all the accessories such a theme would demand. Bird cages, ships, and water fountains are all things the fashionable ladies put upon their heads.

Every time Mrs. Blinkhorn suggests something, she is met with a resounding “No” by Mrs. Paddington. It seems either she or some other lady has already worn that hairdo. There’s no way Mrs. Paddington could win the top prize at the ball if she wore a hairdo that had already been worn. How embarrassing!

Eventually, the perfect hairdo is imagined and created – a windmill surrounded by an array of tulips. With a wire frame and extra hair “donated” by the maid, Mrs. Blinkhorn gets to work to create the perfect fashion statement. Eventually the styling is completed and then the hairdresser adds a mixture of beef-marrow and wax to hold the “creation” together. Now the only problem is, how will Mrs. Paddington ever sleep with that masterpiece atop her head?

Readers learn that Mrs. Paddington can, indeed, sleep with three feet of hair, tulips, and a windmill on her head thanks to some specially designed pillows. But there’s a problem…remember that mixture of bone-marrow and wax? There’s also a little sugar water added in to keep everything in place and you know who loves all those tasty additives? Mice! Mrs. Paddington is going to have to find a way to keep those little creatures away if she has any hopes of getting that coveted top prize at the ball.

Mrs. Paddington and the Silver Mousetraps is undoubtedly one of the most unique children’s books I’ve ever read. The history behind these hairdos and the lengths women went through to “look beautiful” is both fascinating and bizarre. The fact that bone-marrow and sugar water were used, and that the mixture attracted mice (and lice!) will amaze readers. Add in the fact that there was indeed a store in London (the building is still standing) that catered to women with a “mouse problem” and readers will be scratching their heads in wonder. The illustrations are perfect – with a bit of outlandish playfulness to accentuate the unusual story. The only regret is that we never learn how Mrs. Paddington’s hairdo was received at the ball. But I’m sure the mice were gone and she was a big hit with her tulips and windmill.

Quill says: A fun and entertaining look at outlandish hairstyles that were once in fashion. Young readers will certainly get a giggle out of this entertaining story as they learn a bit about 18th-century hairstyles.

For more information on Mrs. Paddington and the Silver Mousetraps, please visit the publisher’s website at: redchairpress.com or the author’s website: www.gailhennessey.com