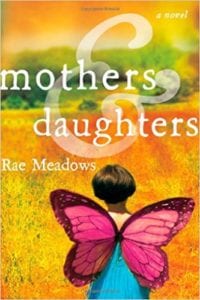 All the moms out there will not only get imbedded in this amazing story that takes a look at three generation‘s of moms and their daughters, but they will also look at their own child and see the absolute blessing that exists in the relationship they’ve had a hand in creating.

Violet is an eleven-year-old girl who lives her life surrounded by the grit, filth, and poverty that is prominent in the Fourth Ward in NYC. Her mother, Lilibeth, took Violet away from the wealthy southerners that they called family. Lilibeth’s extraordinary beauty had always made up for the lack of wisdom that she possessed. She was used to the refinement that she’d been born with and the silver spoon she carried in her mouth, but after she was hurt by a man, she decided to make a new life for her and Violet in the North. Lilibeth ended up spending most of her time at Madam Tang’s in Chinatown, batting her eyelashes and thinking of the past, as she got lost in the cloud of opium that surrounded her like a deep fog. Through various circumstances (and truly incredible story-telling) Violet ended up boarding a train that would take her, supposedly, to a nice Christian family in the Midwest. The real facts? Her mother had signed a paper literally giving up her daughter to strangers…which was just the beginning of the secrets that Violet would store away for future generations to find.

Iris is the daughter of a somewhat cold and distant woman named Violet. At seventy-two years of age, Iris is dying of cancer, and is looking back upon the dreams that never came to fruition. She thinks of the love, beauty, events, and celebrations that gave her happiness, as well as the lost opportunities. In her possession is a box of secrets that will someday fall into the hands of her beloved daughter, Sam.

Sam lives in the Midwest with her loving husband and beautiful daughter. Missing her mother, Iris, Sam receives a box filled with odd letters, ticket stubs, and items that seem a bit like junk, until she begins to investigate the women she came from. Her gift is creating pottery, which Sam hasn’t been able to do since bringing her daughter into the world. She is unbelievably-paranoid and beyond over-protective, and can barely drop off her daughter in her best friend’s care. Sam has secrets of her own, and some days she can barely get past them in order to look to the future.

This story is how a trio of strong, stoic women lived their lives - passing on their immense courage to the generations that came after. Each woman’s life is absolutely magical and heartbreaking all at the same time, as the reader will see as they’re led through three very different worlds. Powerful is the one adjective that completely describes Ms. Meadows novel. The individual histories of each of her characters are absolutely riveting, and the in-depth look at the mother-daughter ‘link’ is truly inspirational.

Quill Says: This author sends a very meaningful message. In the end, the point is not that we live Happily Ever After. The point is…that we live! Beautiful, kind, powerful…this novel is a true gift!