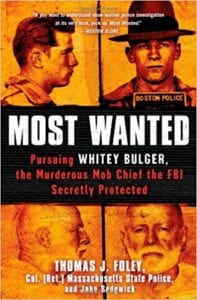 James “Whitey” Bulger was one of the country’s most horrific mobsters. The head of the Winter Hill Gang from South Boston, he ruled for several decades while the FBI looked the other way. Then, in the mid-90s, when the tireless investigative team led by Thomas Foley was closing in on Bulger, he was tipped off and fled. After sixteen years living as a fugitive with his girlfriend, he was finally captured and now awaits trail. This is the riveting behind the scenes story of Whitey Bulger, the bloody trail he left and how he was finally found, told by the man who led that investigation.

The author of Most Wanted, Thomas J. Foley knows the Bulger case like no other person in law enforcement and he breaks it all down in this book, from Bulger’s childhood, first scuffles with the law, to his growing power and murderous rampages. Accused of killing 19 people (and possibly more), Bulger was trouble from the start. While his brother Billy was studious and would later rise to the powerful position of president of the Massachusetts State Senate, Whitey's first arrest came early in life. He was honorably discharged from the Air Force after being charged with rape, and in 1956, after returning to Massachusetts, sentenced to twenty years for bank robbery. That would be the last Whitey would see of a prison for a very long time.

Released from prison after serving just nine years, Whitey continued his life of crime and in the 1960s, aligned himself with one of the local Irish gangs. A gang war was going on and Whitey, through manipulation and murder, rose to the top of the Winter Hill Gang. From there, he would reign through the 90s, controlling much of organized crime’s activities in Massachusetts.

Foley, the former head of the Massachusetts State Police, was also the commander of the SSS (Special Services Section) and was in charge of bringing Bulger and his right-hand man, Steve Flemmi, to justice. He recounts the attempts in the 80s to get Bulger, with sweeping ideas of bugging every home, car and restaurant where members of the gang were known to hang out. Unfortunately, Bulger was always one step ahead and bugs were removed faster than they were placed in hiding spots. In the 90s, with Foley in charge, the focus of the investigation was changed and attention was turned first to the lowly bookies; get them, surmised Foley, and they’d be able to go up the chain of command in the Winter Hill Gang. The author provides a fascinating look into how they went about getting various members, and how those members were convinced to testify (and why some refused).

Foley suspected early on that there was something going on with the FBI, and when his suspicions were proven, we see what the author had to deal with to keep his case alive. He was stymied almost every step of the way by the FBI, and particularly by John Connolly, Bulger’s FBI contact. Many men would give up and walk away but Foley was tireless, in part no doubt, because the victims’ families were desperate for help. Through testimony from Bulger’s accomplices, the reader will learn just what happened to many of the crime boss’s victims, how he liked to do the killings himself, and what was done with the bodies. Considered by some in South Boston as a sort of Robin Hood, this book brings to light the absolutely horrific, disgusting man Whitey Bulger was, and no doubt, still is today. Thanks to Foley’s efforts, he will finally be brought to justice when his trial starts later this year. Hopefully it will also bring some semblance of peace to those who suffered at Bulger’s hands.

Quill says: An eye-opening, fascinating look into the life of Whitey Bulger and how a team of dedicated law enforcement officers brought him to justice.