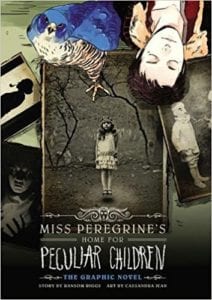 For those readers who have not yet been exposed to the absolute beauty, eerie horror, and hauntingly stunning story that is, Miss Peregrine’s Home for Peculiar Children, this book is not only an amazing gift, but it will also have one and all running back to the bookstore in order to purchase the ‘original’ book, not to mention the highly-anticipated sequel.

This story by Ransom Riggs shot to the top in what seemed like moments after the book came out on the market. It was so different and so well-written, that a great many readers, authors, publishers - you name it - gasped when they read the words and saw the incredibly odd, haunting pictures that highlighted Riggs’ story.

Miss Peregrine’s was a book that took the world by storm, because the story was beyond inventive. But it also made many believe that oddities which ARE out there in the world may just be true after all. Our own fears, from aliens crashing in Roswell to bilocation to the existence of real angels, demons and ghosts, have always been placed in the category of the ‘supernatural.’ And if any actual evidence or photos are located, they are simply passed off as fake, because it remains easier to deal with them if they’re chalked up as nothing more than a joke. In some ways, Ransom Riggs’ story changed the way people think.

The tale followed Jacob Portman. This boy found himself on somewhat of a mission trying to unravel fact versus fiction in the stories that his grandfather told him regarding his own life during WWII, where he dwelled at Miss Peregrine’s Home for Peculiar Children, with some of the most amazing kids imaginable.

Jacob sees pictures of these children - some with supposed ‘gifts’ that Jacob feels could not possibly be real. He sees some things as nothing more than a product of his grandfather’s imagination until…Jacob sees with his own eyes what Miss Peregrine’s is all about.

A book feasted on by readers, is now a graphic novel that is truly a ‘feast’ for the eyes.

Quill says: Do not miss out on entering the peculiar world of Miss Peregrine.