Miracles Among Us: A Collection of True Miracle Stories 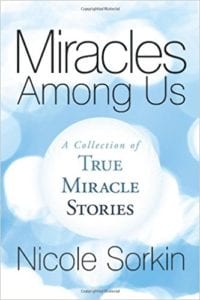 Miracles Among Us: A Collection of True Miracle Stories

Author Nicole Sorkin has compiled thirty-six stories about miracles that happened to ordinary people. Each short chapter tells a different person's story, so readers can read the book all at once or, alternatively, open the book and begin reading anywhere in moments when they need inspiration. The characters in Sorkin's miracle stories are quite varied in their personalities, lifestyles, ages, and occupations. Most people, as they read through the stories, will find someone in the book with whom they can identify.

Sorkin's miracles also span a wide range. In one chapter a family's prayers are answered when they find the perfect kitten for their daughter. Another story tells of a child's miraculous recovery from illness after doctors told his parents that he had less than a day to live. What Sorkin's stories have in common is that in each, the main character did not give up hope but continued to trust his or her intuition or continued to pray. Readers who are going through difficult times in their own lives may find reason to be hopeful after reading thirty-six happy endings. Sometimes everything does come out right in the end. Most inspiring are the stories where a character narrowly escapes death. For example, a family survives a bomb during World War II because a child listens to a voice that tells her to hide in a closet. Everything is destroyed but the walls of the closet, which protect the family under a pile of rubble until rescuers can find them. In another story a man receives medical care in time to save his life because a UPS driver comes to deliver a package and finds him unconscious after an accident. Sorkin urges us to believe that someone will be looking out for each of us, like the characters in these stories, if we pray and have faith in the possibility of miracles.

Each story in this book is a quick read. Some chapters are as short as two pages, so the book would be good for someone who occasionally needs a quick burst of inspiration. Also, each chapter begins with a quotation which relates in some way to miracles. I found some of these inspiring on their own. Readers who have time to sit down and read Miracles Among Us all at once, on the other hand, will come away with the feeling that all problems big and small can have happy endings, however unlikely it may seem at first. Perhaps these readers can carry this message with them and remember it later in situations that feel hopeless.

Quill says: A collection of stories that encourage faith and hope.