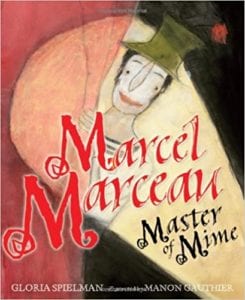 At the age of five, Marcel Mangel knew what he wanted to do with his life. He wanted to entertain people. Charlie Chaplin was his hero. But growing up on the border of France and Germany during World War II, his idyllic childhood was quickly interrupted. By the age of sixteen, Marcel became one of many who risked their own lives guiding Jewish children across the border into the safety of Switzerland and who worked in secret to change identity cards of other Jewish children so that they would not be victims of Nazi persecution. And then Marcel changed his own identity – changing his last name to Marceau after a General of the French Revolution.

Never losing sight of his dream – to revive the ancient art of mime – Marcel continued to entertain and delight adults and children alike. When he was twenty, he studied with the famous mime Etienne Decroux and performed for Allied troops, spending long hours perfecting his art and creating the character of Bip. For over half a century, Marcel spoke and entertained and never spoke a word, reviving the ancient art of silence in a unique way.

Marcel Marceau: Master of Mime is a treasure trove of fascinating stories about Marceau, a gentle introduction to the realities and horrors of World War II, and a subtle reminder of the power of silence as a communication tool.