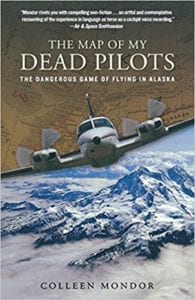 The lure of the Alaskan wilderness has always beckoned to the adventurous, but sometimes the foolhardy. It was a Mecca that drew pilots who thought they were invincible and could somehow conquer the bush, but more often it was the bush that conquered them. Many had gone to Alaska because they had nowhere else to go. The author, Colleen Mondor, went to "Alaska in the hopes of leaving aviation behind forever," but it reared its ugly head again as she took a dispatcher's job. She had to face it and she had to listen to the stories, stories that were ingrained into the very fabric of the landscape.

The main thread of this book encompasses the simple question: "Why do some pilots live and some die?" The Company would take anyone who could do the job. Some died from inexperience, while others dared the gods above to take them, convinced they wouldn't or couldn't. Everyone listened to Scott when he told his Chalkyisik story. He left in fifty-five degree below weather to a destination that was sixty-seven below. He made it and it was just a story that could have used a bit more embellishment, but for those who crashed everyone else did the embellishment for them. What did they have to go and die for anyway?

The tales swirl through the pages of this book like a dust storm, depositing little tidbits here and there to think about, to mourn, or to laugh about. There were those widow maker crashes, but then again there were the corpses that had to be taken on board along with the grieving. It was a job, good, bad, or indifferent, it was a job. The Company spurred them on and no matter how the planes were dangerously overweight or decrepit, they had to work. It was a job, but also their story.

Somehow Colleen Mondor's writing style reminded me of Kate Braeston's in Home Before Dark. Mondor captures the very essence of the men who attempt to conquer the Company and the Bush, but never quite succeed because the romance has been taken out of the wilderness. The wilderness has been subtly mapped by the GPS and the flying is simply something controlled by the Bosses. The stories, set on paper though the anger, the laughter, and the tears, are about real men whose lives and deaths are sprinkled throughout the Alaskan wilderness just waiting to be rediscovered. I loved going along for the ride, a delightfully memorable one.

Quill says: This is an amazing memoir of the men who conquered the Alaskan Bush and those who were conquered by it.