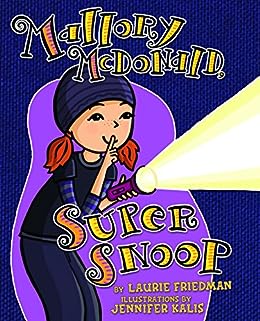 “You’d rather,” Mallory asked her best friend, Mary Ann, “study spelling than spy on Max and Winnie?” It was hard to believe that anyone would prefer spelling to snooping, but Mallory was sure in the mood for it. She just absolutely had to know what her brother Max and Winnie were doing in his room after school. Since they were “officially boyfriend and girlfriend” Max didn’t want her to tag along. At all. It really wasn’t fair because she was his sister and that Winnie was Mary Ann’s stepsister. At any rate, their parents were going on a vacation “get away” for a week and it would be the perfect time to spy on them.

It was VVI (very, very important) to find out what they were doing while her parents were gone. Mary Ann was going to be studying spelling with her boyfriend, C-Lo, so now was the time to act. Crystal, their babysitter, was VVI (very, very insistent) that she “stay out of other people’s business” and that meant Max and Winnie. They claimed they were working on a science project and when Mallory made out her list of ten things they might be doing when they were alone in Max’s room it wasn’t on there. Mrs. Daily, her third-grade teacher had talked about “three’s a crowd” and now Crystal was talking about it too.

It was time to put on her dark sunglasses, get out her magnifying glass, and tape recorder. Just what were they doing in that room? “Which part of `we are working on our science project’ is hard for you to understand?” Max was really, really getting mad, but that could be a clue. Mallory never quit and she came up with a really good plan that even Mary Ann would think was VVI (very, very impressive). She was going to ask everyone to play a game of Hide-and-Seek. Then the mystery of what Max and Winnie were doing in his room would be officially solved ... or so she thought. “Wait until your parents get home!” Was Crystal really going to tell them what she did?

Mallory McDonald, 17 Wish Pond Road, age ten, is in really BIG trouble. To snoop or not to snoop? Why not? When Mallory goes into action she goes a bit overboard and in this book she really goes into overdrive. I’m a far cry from being ten years old, but I adore Mallory when her imagination goes wild and her common sense flies out the door. She just can’t figure out why Max doesn’t want her around, nor can she quite understand why everyone else isn’t interested in his business. As usual, she’s making her lists and checking them twice just to make sure she hasn’t forgotten anything. The thing she did forget is how to keep out of trouble (as usual). This is one hilarious Mallory mystery that will keep you smiling until the end!

Quill says: If you've made the acquaintance of Mallory McDonald, you're going to love it when she becomes a super snoop. If you haven't met her, it's about time you did!