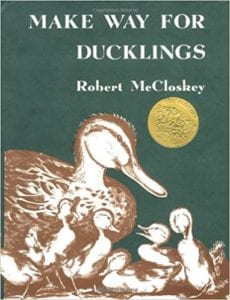 We don’t normally review books that were published so long ago, but I’ve “re-fallen” (is that a word?) in love with this book and I wanted to share with our readers. I was in Boston recently and, while browsing in the "Bostonian Society Museum Shop," found (or more aptly, re-discovered) Make Way for Ducklings by Robert McCloskey. I LOVE this book.

Make Way for Ducklings was originally published in 1941 and is about the ducks living on the Boston Common. Mr. and Mrs. Mallard are looking for a place to live but they just can’t seem to find the right spot. Finally, after much searching, they discover the perfect new home – a tiny little island, surrounded by a lovely pond, in the middle of the Boston Public Garden (a.k.a. Boston Common). The ducks love their new home and start thinking of raising a family there. But just then, a boy on his bike, vroom, vroom, comes squealing through the ducks. “We’ll have to look somewhere else,” suggests Mrs. Mallard. The ducks eventually find a quite spot next to the Charles River. They build a nest and hatch out eight wonderful ducklings. Life is grand for the new duck family.

Robert McCloskey got the idea for this book while living in Boston. “I noticed the traffic problem of the ducks, and heard a few stories about them. Then the book just sort of developed from there.” (from the dust jacket)

Make Way for Ducklings is a sweet story with fabulous drawings by the author (all in brown pencil - no bright, multi-colored pictures). The drawings have a very old-fashioned feel - check out the cars in the pictures! - which I really got a kick out of. The story itself is timeless. A bronze statue of Mrs. Mallard and her ducklings (one has a tendency to wander off, er, get stolen from time to time) greets visitors to Boston Common while the book itself has never been out of print since 1941 and has sold over two million copies! If you go to Amazon to purchase, be careful about buying used copies. Because the book is so old, used copies apparently can be old, creaky, smelly, etc. The copy I bought is brand new.

Quill says: If you've never read the book, or haven't seen it in a long time, check it out. Your kids should enjoy it as much as you did a “few” years ago.