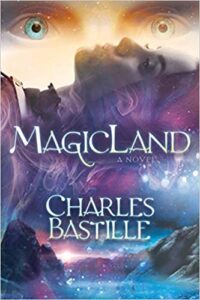 Magic, cybernetic mechanisms, and romance make up this taut debut by Charles Bastille as two souls are brought together by love and for the common good.

Set in a post-apocalyptic world, Bastille introduces readers to a desolate Earth, plagued by problems caused by years of war. The two species of inhabitants, the Gath and the magicians of Moria, are vastly different and live on opposite ends. Belex, a Gath humanoid with tech mechanisms, finds himself in MagicLand, the land of the magicians, after an air crash that leaves him temporarily blinded. Unfortunately, he realizes his biosystems too have failed, the only key that connects him to his homeland. Aurilena, a 17-year-old priestess in training, finds him and is immediately intrigued by his features, soon after realizing he is not one of their own.

Despite Belex's initial callousness and suspicion towards Aurilena, his misconceptions about her change, and the two fall in love. Soon after, they unearth an impending attack on Moria by the Gath people and both realize time is against them. With the help of Hilkiah, the High Priest, they embark on saving the land from destruction amidst the opposition they continually face on their blossoming relationship.

MagicLand: A Novel is a high-octane text worth turning the pages to see what lurks ahead. Bastille's deftly-wrought prose is nothing short of sublime. The vivid world-building of artificial intelligence and magical creatures is breathtaking. The tale is immersive from the beginning and the narration is comprehensive and holds one's attention to the very end. Usually, books with an infusion of magical and biopunk elements do not balance the two features and one tends to lean on the other. However, Bastille maintains a razor-edge equilibrium between the two culminating in a vibrant tale and no single element overshadows the other.

The deeply resonant characters are well thought of and though connected by a common destiny, the main protagonists are given space to develop on their own. It is easy to find a voice in the inception of this story. The plot interweaves backstories with present stories, a feature that helps readers connect with the characters. One major strength of the book is its evocative imagery and creative naming of places that are synonymous with the characteristics of these places and the traits of the characters.

No stone is left unturned as the author gives a swift send-off to all his characters. The twists and turns too will keep a reader guessing all the way to the close. MagicLand: A Novel by Charles Bastille does not only make for pure escapist entertainment but also aims to examine societal problems and inequalities. And simply put, what is art for? Fans of fantasy novels sizzled with romance and biopunk elements will find this book a rewarding experience.

Quill says: MagicLand: A Novel is an ambitious debut that is penned with clarity and precision to deliver a much-needed breath of literary fresh air.

For more information on MagicLand: A Novel, please visit the author's website at: charles-bastille.com