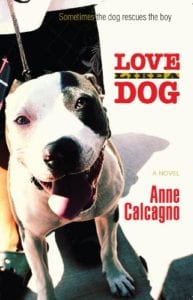 Eight-year-old Dirk Seward felt totally abandoned until Bull's Eye came along. His mother had abandoned him at the tender age of three and his father, who worked long hours at the Happy Mart, simply seemed to exist only to tell him to stay inside when he wasn't home and feed him. Russ found the pup scrambling around in a dumpster and brought him home and presented him to the boy, who later thought that before the pup, "the loneliness had been like an ice pick landing on [him]." His father started reading up on the breed and quickly discovered that a pit bull wasn't for the "meek and mild." Dirk's best friend's mother had something to say about that: "Who gives their kid a pit pull? Insane!" Perhaps, but Dirk was no longer alone and was in love with his dog, a dog who would be fiercely loyal to him.

Russ soon found out about weight-pulls and father and son were mesmerized by the competition. He quickly set Dirk to training Bull's Eye, who was a natural at weight- pulling. It was good, clean entertainment and when a dog fight broke out at an ADBA weight-pull, men erupted in anger berating the low life who allowed his dog on the field. The Marshall angrily retorted to the crowd that "dog-aggressive dogs are strictly prohibited." Bull's Eye would never fight, but perhaps Russ saw something in that scene that twisted his thoughts. Their dog had done amazingly well for his first run out and Russ spouted to the men around him, "Found him in a dumpster, too. Talent ready and waiting. One man's garbage is another guy's treasure." Bull's Eye was Dirk's most trusted companion, but perhaps a touch of evil had visited the field that day.

Nellie, an experienced pit breeder, began dating Russ. The house had to be spit shine for her appearance and the father and son pair worked hard to meet her approval. She called her dogs "her girls." Dirk loved her and soon discovered that "The dogs were her life and most of her stories." Later an agreement was struck that when Bull's Eye was bred to one of her dogs, the exchange would be a pup. That pup turned out to be Delilah, "Dee" for short. Dirk would train her with love, just as he had with Bull's Eye, but Russ had other things in mind. Barely a year had passed when evil crept into the house. Russ wanted to make money. "Tears of rage flew off [Dirk's] face" and he "couldn't even look Delilah in the eye." An insidious momentum was building, but could Dirk stop it? Were his innocent dogs going to pay the price for one man's greed?

The father/son relationship in this book was akin to watching a train wreck. The son grew and matured as he learned the meaning of love in relationship to his dogs while the father slid into an evil morass filled with unethical breeding and dog fights. The writing was astonishingly powerful and evoked an emotional response from me that I wasn't expecting. Some of the scenes are quite emotionally provocative, especially the "forced submission" of a dog too young to breed, fight animals in cages, and the dog fight scenes. Many people, especially those who do petition for Breed Specific legislation may not appreciate a book written by a pit bull lover, but those individuals can simply bypass this work. The author mentions that it is "illegal to fight-train," but in essence is calling for more stringent laws on dog fighting, a crime that rarely results in convictions.

Quill says: A very powerful book brings forth the love of a boy for his dog while condemning those who abuse innocent dogs.