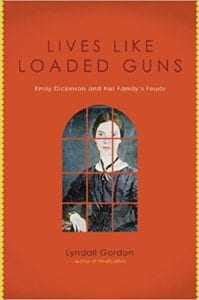 When we took our American lit classes in high school and college and read a few poems by Emily Dickinson, who lived from 1830 to 1886, we learned that the poet was a woman disappointed in love, a recluse in a white dress who flitted around her family’s house in Amherst, Massachusetts. We further learn that she wrote letters to a “master” who apparently spurned her and that her poetry is full of funny punctuation and striking images. We read a few of her poems (“Because I could not stop for Death – / He kindly stopped for me….”) and then turn the page to read about Edith Wharton, Henry James, and Louisa May Alcott, and that’s it. We know all about 19th century American literature.

Well, not quite. English biographer Lyndall Gordon, who is famous for her biographies of T.S. Eliot, Virginia Woolf, and Charlotte Brontë, has explored the Dickinson family through letters to and from numerous family members and friends plus Emily’s poetry. Lives Like Loaded Guns opens with a paragraph worthy of a daytime soap: "In 1882 Austin Dickinson, in his fifties, fell in love with a young faculty wife. Twenty-six years before, Austin had married Susan Gilbert, the friend of his sister..." (pg.3)

Austin had courted both his wife Susan and Susan’s sister. So had Austin’s sister Emily. (The author tells us that it was common in the 19th century for women to write letters to each other using the most passionate terms. The letters sounded like love letters. Emily was “courting” Sue to become her “sister.”) Mabel Loomis Todd was the wife of a philandering astronomer. After she seduced Austin, they conducted daily “visits” in the house where Emily was living upstairs. Meanwhile, the poet herself was living a hidden life not because, as Gordon discovered using primary and secondary sources, she was disappointed in love—she was, like other members of the family—an epileptic. But epilepsy was as shameful as mental disease in the 19th century. Convulsions had to be hidden. And Emily’s famous white dresses? She wore them to preserve her physical cleanliness and moral purity. And was she a spurned woman? Gordon found evidence that, yes, while she did correspond with prominent men, she also found comfort in the arms of a retired judge. Mabel Loomis Todd tried to become friends with the poet but apparently never met her face to face, even though she (Mabel) had a valiant coconspirator in Lavinia, the sister of Emily and Austin. Before the book’s half done, the Dickenson family begins to sound like Desperate Intellectuals/Puritans of Amherst. Their story, plus the feud between them and Mabel Loomis Todd, turns an episode of American literature into a compelling soap opera.

After Emily died, Mabel managed to get some of the poet’s work, which she edited and published. All along, Mabel (and Lavinia) had slandered Susan Dickinson. Their daughters carried on the feud into the 20th century, when various parties were searching the Dickinson houses and finding more and more of Emily’s poems and letters. It’s a fascinating literary detective story.

Features of Lives Like Loaded Guns include a map of the town center of Amherst, showing where Emily lived, where the Todds lived, and other locations. Next is a dramatis personae that is very useful as complications in the lives of these people arise and tangle up. The illustrations include photos of the Dickinson family members, their friends and enemies and correspondents, and their homes. Especially interesting is a series of photos of Emily that transforms her from a plain Jane to our familiar fragile poetess. (Gee, Photoshopping isn’t new.)

Quill says: Toss the supermarket tabloids and read Lives Like Loaded Guns. You’ll learn a lot more about one of America’s greatest poets than your English teachers ever said. Or knew until now.