Little Boy Blue: A Puppy’s Rescue from Death Row and His Owner’s Journey for Truth 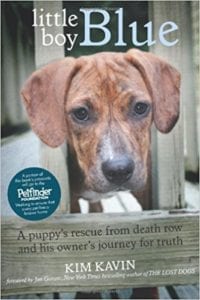 Little Boy Blue: A Puppy's Rescue from Death Row and His Owner's Journey for Truth

When Kim Kavin lost her beloved old dog Floyd, she began to search for a puppy to keep her other dog, Stella, company. Scrolling through puppy pictures on Petfinder.com, she fell in love with the photo of a brindled Labrador/Plott hound mix. Living in New Jersey, Kavin was excited to see that the adorable puppy was in nearby Pennsylvania. Kavin soon learned, however, that her new puppy was not from Pennsylvania but rather from a “kill shelter” in North Carolina. This was the first inkling of her dog’s mysterious past, a history that would send Kavin, a journalist who proves she knows how to research a topic, on a trip through the deep South and the horrors that surround the world of kill shelters.

When “Blue,” Kavin’s new puppy, arrived, he was shy but very sweet. The author asked herself again and again why such a wonderful dog was scheduled to be euthanized. Surely there had to be many people wanting such a perfect puppy. After talking to her vet about Blue’s possible bout of ringworm, and tracking down one of the volunteers from the rescue in North Carolina, Kavin found herself asking more and more questions and getting very few answers. When she learned that Blue came from a shelter that used a gas chamber to kill its dogs, she was horrified.

Kavin soon set out on a trip to discover for herself just what was going on with the shelters in various southern states. Why were gas chambers the preferred method of euthanizing animals in so many of these shelters, and how did the rescue organizations work behind the scenes to save so many, but never enough, dogs and cats?

Anger, heartbreak, and happiness are just a few of the emotions you’ll experience as you read this book. Kavin is not timid, and goes right to the people in charge of the shelters to ask the “hows,” “whys” and “how could you?” questions that you too, will want answered. She introduces the reader to numerous groups working, against the odds, to save as many dogs as possible. And while she uses plenty of statistics and facts to back up everything she says, the book reads like a mystery unfolding and not a technical journal on the world of animal shelters. If you love dogs, this is one book you must read. It’s too important not to bring to light the awful truths surrounding our “throw-away” dogs.

Quill says: This book changed my plans for our next dog – which will be a rescue. Read it and you too, will want to help save these dogs.