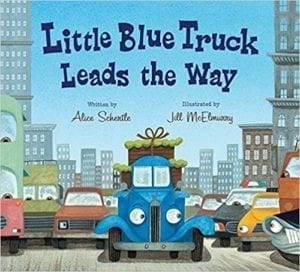 The little blue pickup truck approached the city limits just before the stars left the sky. A skunk and her kits quickly crossed the road in front of it. "Beep!" Many other vehicles were also rolling into the city to start their day. "Beep! Beep! Beep!" The further into the city the little blue truck drove, the closer the buildings got until many merged into a single block. The pace of the city picked up and a Speedy Delivery truck, a taxi and a black car raced by the little blue pickup. Meanwhile, a tour truck was close on its heels. "ZOOOM! The little blue truck was startled when a Rides-R-Us tour bus began to shout, "Shove on, Shorty!" Rude, totally rude.

It seemed to be getting faster and ruder by the minute as the volume went up and the shouting continued. The little blue truck seemed to be right in the middle of everything and in everyone's way. A police car buzzed on by, the street sweeper almost caught him up in its brushes and a limousine almost crashed into him. "MAKE WAY!" It was the mayor. "Cars and trucks were all in a tangle. Everyone started to shout and wrangle." The limousine was all pooped out and the mayor had places to go. Would the little blue truck save the day?

This is the sort of true-blue truck story your truck loving youngster will ask for time and time again. The rhyming scheme gives this book a nice easy flow and the artwork is simply charming. When the pace of the city and traffic accelerates the more exciting and comical the rhymes become. "A grocery truck gave his horn a blast. `MOVE IT, BUD - I"M FIRST, YOU'RE LAST!'" I think you can count on reading this one over and over and over again! Beep! Beep! Beep!

Quill says: Your truck loving youngster will ask for this book time and time again!