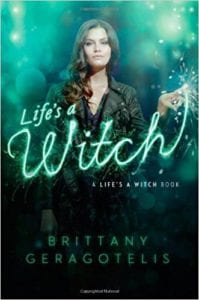 Hadley Bishop is a young woman who has it all. Beauty, brains, a great entourage of friends, and she's even on the cheerleading squad at school. However, unlike other popular girls at school, she's also a witch. Yes, a real, live, honesty-to-goodness witch. The catch is, while witchcraft is great for styling your hair when you're late for school, it's tough when you can't tell your best friends.

Life's a Witch begins in June 1692. Bridget Bishop, who we later learn is the great-great-great-and-so-on grandmother of Hadley, lives in Salem, MA and has been sentenced to die for being a witch. When Reverend Samuel Parris comes to visit Bridget, the reader supposes it is just to say good-bye to his friend, but it soon becomes apparent that there is a lot more going on. Parris, it turns out, it also a witch and hungry for power, he has betrayed others of his coven, including Bridget. Unfortunately for Bridget, the chapter ends with her death, but rest assured, her powers haven't died with her.

Fast forward to the present day, where we meet Hadley Bishop, who has just woken up, rather violently, after having yet another dream of Bridget Bishop being hung. Hadley knows she's a direct descendant of Bridget, but she doesn't have time to dwell on the nightmare because she needs to get to school, and pronto.

At school, Hadley has a good group of friends and it quickly becomes apparent that Hadley is THE girl at school. It would be easy to hate such a popular girl, and indeed, I initially thought I wouldn't like her, but she definitely grows on you. She's smart, witty, and does have a nice dose of humility. After school, the young witch heads to a family friend's house where several young witches are meeting to practice their spells. Hadley, however, just can't seem to take it seriously. She's told repeatedly (especially by her mom) that they have to prepare in case the 'Parrishables,' an evil coven out to destroy all others, returns from the past. Hadley just can't worry about some long dead coven when she has cheerleading practice to think about. That, however, all changes when her mother, and the adult witches from their coven, meet and are all killed. Suddenly, Hadley is forced to grow up and lead her fellow 'twitches' (teen witches) in an all out battle to fight the Parrishables.

Life's a Witch originally appeared on Wattpad where it quickly gained a strong following and enjoyed over 19 million downloads. Now in book form, it's available for those of us who enjoy cuddling in bed with a good book. The story was an easy and VERY fun read, that focused on a group of teen witches, led by Hadley. The girl who never took her magic seriously must lead a group of frightened, untrained teens to battle a very demonic, seasoned coven, bent on destroying Hadley and her friends. Add to that a new love interest, Asher, who is more handsome than any boy has a right to be, and yet, may just be a spy for the Perrishables, and Hadley has her work cut out for her. The book has several unexpected twists, the characters are well developed, and you'll no doubt be asking when the next in the series will be out by the time you read that last page.

Quill says: Life's a Witch is the start of a magical series, perfect for tweens, adults and all the "twitches" who like a good, engrossing, don't-skip-a-page read.