The Life and Times of the Real Winnie-the-Pooh: The Teddy Bear Who Inspired A. A. Milne 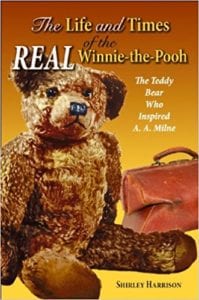 The Life and Times of Winnie-the-Pooh

Winnie-the-Pooh, his friends Tigger, Kanga, Eeyore, Piglet, and Christopher Robin are well-known by children – and adults – around the world. Their adventures in the Hundred Acre Wood are legendary and can be recited by countless fans. While the characters and their exploits are renowned, many people don’t realize that all the animal characters are based on real, or rather, stuffed animals once owned by author A.A. Milne’s son Christopher.

While many books have been written about Milne and the Winnie-the-Pooh books, including three autobiographical books by Christopher Robin Milne, The Life and Times of the Real Winnie-the-Pooh is the first that focuses on the famed stuffed teddy bear behind the stories. Author Shirley Harrison has thoroughly researched the topic and presents, in a well-written and engaging manner, the history behind the bear.

Harrison begins her book with a look at the Farnell Teddy Bear Company, the company where, in 1921, Pooh was “born.” We get a brief history of Farnell, and even learn a bit about competitors such as Margarete Steiff’s still famous Steiff bears. From here it’s on to Harrods, that beloved London landmark where Pooh found himself shortly after his birth and where Daphne Milne purchased the small teddy bear for her one-year-old son Christopher Robin.

While we learn much about A.A. Milne, his wife Daphne, son Christopher, their household staff, and even illustrator E.H. Shepard, the star of this book is always a little stuffed teddy bear. You'll get a peek at the real places behind the stories, such as Ashdown Forest, the inspiration for the Hundred Acre Wood, meet Winnie, the real bear behind the name, discover where "Pooh" came from, and how Winnie-the-Pooh and his friends found themselves travelling to America.

From the toy department at Harrods, to the strolls Christopher and his nanny took through Ashdown Forest, the author's descriptions are vivid and informative. While there is a fair amount of background history related to the various companies, stores, places, etc., these historical references help set the tone for the world in which Winnie and his owner Christopher lived. There are also quite a few photos of those involved in Pooh's life, from an adorable photo of a very young Christopher, his mother Daphne and, of course, the child's beloved teddy, to views of landmarks around the Milne's home back in the early 1900s, to Pooh's exploits in America. The Life and Times of the Real Winnie-the-Pooh is a throughouly enjoyable look at a little stuffed bear who helped create a world of bears, honey, and friendship.