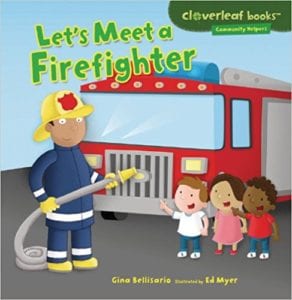 The class gathered outside the fire station to listen to Firefighter Jim tell them what he does. Two other firefighters were very busy scrubbing down a fire engine to keep it nice and clean. Firefighter Jim said to the boys and girls, “I solve problems called emergencies.” Of course fighting fires wasn’t the only thing firefighters do. In fact, they were soon to learn, they did other things like help people when they got into traffic accidents and rescue “people trapped by floods.” Yes, they did all those things, but firefighters responded to medical emergencies the most.

Firefighter Jim claimed that “sometimes people who are sick or hurt need help fast.” That’s because their ambulance could get there before anyone else. Of course they did fight fires and some “firefighters stop wildfires.” Maya was very interested in becoming a firefighter when she grew up and Firefighter Jim told her about going to a “fire academy.” After his little talk, the children went into the fire house to learn about the tools firefighters use. They learned about an ax, a fire hose, an air pack, bunker gear, how hot a fire can get, a hook and ladder truck, and they learned many other intersting things about firefighters and fire safety.

This is a fun look at Firefighter Jim and how he helps protect his community. Elementary school children often go on field trips to visit fire stations and learn about the role firefighters have as they protect the residents. This is a beginning chapter book that will enable young students to be prepared to ask important questions that firefighters are trained to answer. This is one in a series, “Community Helpers,” that will enable children to explore and learn about people who work in their communities. The newly independent reader can work through this book with a bit of assistance. In the back of the book is an index, a glossary, an activity on making a fire escape plan, and additional book and website resources to explore.

Quill says: If you want to enable your young students to learn about community "helpers," this is one series you may wish to add to your list!