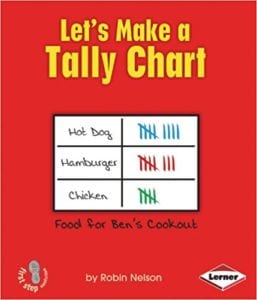 Ben's family was gathered around their picnic table in preparation for a cookout. A large salad had been prepared and there was sweet tea and lemonade all ready to be poured. Hot dogs, hamburgers, and chicken were cooking on the grill. It was Ben's job to ask everyone what they wanted to eat, but "how can he keep track?" He tapped his pencil on his cheek and began to think. One way he could do it would be by making a tally chart.

There are different types of tally charts, but Ben needed to find out three things. He knew that "a tally chart shows data" and that "data is information." He made a list that showed what was on the menu and when he asked what everyone wanted he made a tally mark next to the name of the food. After he had tally marks for four hot dogs, the "fifth tally mark" went "across the other four." When Ben gathered up all his data he gave it to his dad so he could serve up the food.

This is an excellent book for the young student to learn about data and how to use tally marks. This introductory math concept is one that often is introduced in a first grade curriculum. Many teachers have interactive ways to illustrate the concept, but I liked the way Ben created a data sheet to find out what everyone wanted to eat. There were also two other examples of tally sheets. One showed tally marks for two teams while the other one was a poll about favorite pets. The photographs were a mixture of informational data and Ben and his family. In the back of the book is an index, a glossary, a section on "Reading Tally Charts," and one on "How to Make a Tally Chart." There are additional complimentary downloadable resources on the publisher’s website.

Quill says: This is an excellent book for young students to learn the basic mathematical concept of tallying.