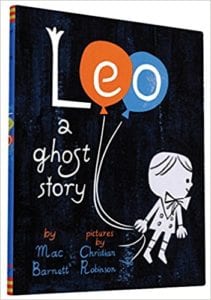 Anyone could see the candlestick telephone on the desk, the worn and torn wallpaper, and those once elegant curtains, but not Leo. He’s right there under the desk reading a book, but he’s a ghost so no one can peek in and see what he’s reading. Leo lived all by his lonesome in that house “reading books and drawing pictures in the dust.” That was until the house was sold and in a flurry people started to move in. The movers began to unload a couch, a box was carried from the car, and even a dog had arrived. Woof! Certainly they would love Leo and love his company as much as he would love theirs...or so he thought.

Leo quickly welcomed them and “on the family’s first night, he made them mint tea and honey toast.” The dog turned to look at him, the cat arched his back and the family stared in surprise. And then that scaredy-cat hid in a box, you know. No, they didn’t like Leo and ran to hide in the tub. “This house is haunted!” cried Daddy and the little boy claimed he wasn’t much for ghosts and tea. Poor Leo, who heard everything, clasped his hands to his mouth. Oh, my, what to do? Well, in came “a scientist, a clergyman, and a psychic to get rid of the ghost.” Poor Leo dressed up in his suit, bow tie and all, and left home.

Out the door, through the iron gate, and down the lane he went. “Maybe I would like being a roaming ghost for a while” and that’s just what Leo did. He went to the city, but it really didn’t look like it used to because “Some places were wonderful. / Some places were scary. / Everywhere it was so noisy.” All of a sudden Leo found a sidewalk full of drawings and a little girl drawing a cat. Meow! She stopped drawing and looked at Leo. “I’m Jane,” she said to him. “What’s your name?” Of all things, she could really see Leo! Was there finally going to be someone in his life that an unwanted ghost could be friends with?

This is a fun, charming tale of Leo, an unwanted ghost, that young children will love. Of course Leo felt a bit left out, like many children do, because no one could really see him for what he was. He may have been a ghost, but he truly was a little boy with feelings, one who could use a friend. Of course he finally meets up with someone who accepts him for what he is. The little girl is an imaginative one and no one really quite believes that she has an imaginary friend named Leo. This is a delightfully charming tale that can be read to younger children, perhaps a read and discuss tale during circle or story time. The artwork is equally charming in muted blues and grays, complementing the friendly ghostly nature of the tale.

Quill says: A fun book with a twist at the end that is quite enchanting and humorous.