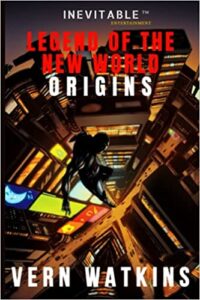 In the year 2047, America is reeling from yet another devastating and violent terrorist attack of massive proportions that occurred in a football stadium during a Super Bowl game, leaving half a million innocent fans dead. The very core of society, the military, and local law enforcement have changed as a result of the attack, causing safety and basic freedoms to hang in the balance.

But America, never known for surrendering even in the face of horrible adversity, isn't going to give up so easily. In a super-secret United States Army base, people are working on perfecting bodysuit technology that enhances the wearer's capabilities in such categories as athletic performance, thus creating a type of superhuman. Their goal is to create a perfect military to assist with restoring order and peace in the nation, and defend against any future attacks. A few elite soldiers have been selected for this program and one in particular, Jackson Okafor, has proven to be far superior using the technology than anyone expected.

Jackson's abilities quickly catches the attention of the two brothers running the program, who have more nefarious and less noble plans with the bodysuits and the soldiers. Their plans not only include Jackson, but they’ve set their sights on expanding the program to the younger generation, and in particular they’ve zeroed in on Jackson’s twelve-year-old son, Mega. However, much to the brothers’ dismay, Okafor is attempting to protect his son by keeping him away from the full program, and the brothers don’t like it one bit, and they’re willing to do anything to get what they want. But will Okafor be able to escape with his family and avoid the brothers and their diabolical plans? And more importantly, what will happen to his son if things go wrong?

Author Watkins’ Legend of the New World is a fast-paced tale that swiftly catches a reader's attention right within the shocking first chapter. In this classic good-versus-evil story, all of the characters, even the villains, are solidly written and add to the overall suspense and yearning to find out what will happen next. At times, the words used didn’t fit the story (example: "Each day, we should be becoming more in sync and consistently taking advantage of all our strengths.") and a different word choice would strengthen the overall flow, thus elevating this good story to an even more impressive one. However, this should not deter any potential reader who is in search of a good science fiction story, as this definitely ticks all the right boxes for not only a thoroughly engrossing story, but one that has people craving a sequel.

Quill says: If you’re in search of a science fiction novel that’s not only engrossing from start to finish, but leaves you wanting more, check out Legend of the New World: Origins, you won’t be disappointed.

For more information on Legend of the New World: Origins, please visit the website www.inevitableentertainment.com