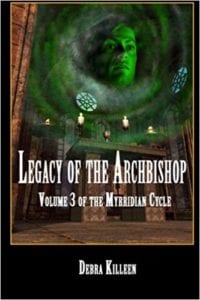 Archbishop Francis McHenry was dying. He was in poor health, and with winter approaching, he knew he didn’t have long to live. Why then, did somebody take the trouble to murder the Archbishop? So begins the third book in the Myrridian Cycle by Debra Killeen, an action-packed, page-turning adventure that will have the reader asking when the next book is coming out.

The death of the Archbishop sends shudders through the kingdom of Myrridia. Aldric Smithson, an evil, power-hungry practionioner of Dark Magic, is overjoyed while young Robert Claybourne, the king of Myrridia, is distraught and concerned for the safety of his subjects. During consultations with Edward Fitzroy, the Primate of Myrridia, it is decided to send for the trusted Duke and Duchess of Saelym so that they can decide together how best to proceed and insure that Aldric is kept at bay. The “real” Duke, a selfish, nasty creature, is dead and being impersonated by goodhearted time traveler Christopher McCabe. Fortunately, the Duchess, Helen, is in on the hoax and is in love with the much more charming imposter.

While the heroes are moving slowly and cautiously, Aldric wastes no time in putting his evil schemes into action. Along the way, the wicked mystic kidnaps Nicole, a good friend of Chris, Helen and the rest of the gang at the castle. Nicole, who caught Aldric’s attention for her skills when she was attempting a conjuring spell, will be used to assist in Aldric’s rise to power. At least that is his hope, but he didn’t expect to come to blows with such a strong-willed woman.

Early in the story, we learn that Edward knows Aldric intimately as they went to seminary together and had a rivalry that continues to eat at both characters. Like Aldric, Edward possesses strange and magical powers although as Primate, he uses his skills for the betterment of society. Will these two powerful men, intent on destroying the other, come to blows?

The Legacy of the Archbishop follows the parallel journeys of Aldric and his group with that of Chris, Helen, Edward, Robert and others, who always seem to be just a few steps behind the evildoers. Will Aldric gain the power he so desperately seeks? Will Nicole ever escape or will she succumb to Aldric’s occasional charms and more frequent bouts of insanity? And what about the struggle between Edward and Aldric? Are Edward’s powers enough to defeat the dark lord? These questions will keep readers glued to their favorite chair as they rush to learn the answers.

One place where many fantasy series fail is in the abundance of one-dimensional characters, each with bizarre names, strange skills, and unmemorable dialogue. But Killeen avoids those traps as she has created a world rich with fabulous characters, each unique, and leaving the reader wanting to learn more about his or her life.

Is it necessary to read the first two books in this series before opening Legacy of the Archbishop? Absolutely not. I admit to being initially perplexed by the mix of 11th century language, clothing, magic and mysticism alongside 21st century views and references, but it quickly became apparent that there were some time travelers amongst the characters. Killeen does a good job of dropping hints along the way about their previous journeys so that the reader is quickly brought up to speed. Other than that minor confusion, there is no reason not to start the series with the third book, except that you’d be missing the fun of reading the first two books, An Unlikely Duke and A Prince in Need.

Quill says: Author Debra Killeen has masterfully taken the fantasy genre by storm and created a world where magic, brutality, heroism, romance and mystery fold seamlessly together to tell a great story.

For more information on Legacy of the Archbishop, please visit the Myrridian Cycle's website at: Myrridia.net.