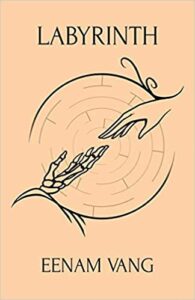 Unrequited love, regret, and emotional pain are a few themes that center on the concept of death in Eenam Vang’s poetically dystopian debut, Labyrinth.

In every life, there is human trauma, which comes in different forms but consistently focuses on one thing: one’s defilement. Voicing one’s pain in poetic form is as old as Shakespeare. Yet, some relate to poetical works; others don’t unless they have “lived through it,” so to speak. Poetry and prose often mix present-day eras with relatable topics such as life, death, and love. Nonetheless, the overall experiment of transforming pain into pen and paper has and continues to have the power to create a healing balm for both author and reader. That said, upcoming poet, Eenam Vang, keeps true to that formula by taking her trauma and utilizing it as an expression of her inner turmoil—a hope to lift others out of their emotional muck and mire. Labyrinth does come with a warning: “The following contains emotions. If proceeding, I dare you to be vulnerable with me.”

Vang’s unique writing style is not bound to tradition. There are few instances of tercets, nonets, and monostich, for example. Vang appears to relish in several-lined, free-verse stanzas, non-concrete poems, and proses, primarily but not exclusively set to first-person point of view (POV). While also dabbling in the other POVs, Vang delves into the concept of death, the result of a downward spiral that comes with low self-esteem and alcohol and drug addictions, to name a few. Her descriptions are visceral, and death appears more symbolic than concrete, like forewarnings instead of finality. Dystopian throughout, Labyrinth is a tightly woven collection that offers hope since it can be viewed as stages in one’s introspective journey. Vang’s one-hundred-plus works could easily be divided into three categories: self-deprecation, self-awareness, and enlightenment, according to this reviewer.

In “Befriending Fiends,” Vang succinctly captures the essence of introspection:

I cannot afford to let my seldom spoken
Demons scare anyone else away.
It should only haunt me.

A great example of self-awareness which is then spoken to another, can be found in “Asudem” (Medusa spelled backwards):

She hibernates on false glorification.
Ships to her throne
Comes farewells to clones.
She is wicked, magnificent, and graceful.
Curse her heart,
I warn you.
Listen to the venom speaking from her slaves;
Indeed, you should protect yourself,
But you should know,
You’ll still end up in your grave.

A battle cry broke through the essence of these long-overdue critiques. We fought through old mazes that lead back to the very beginning of its entrance...

“We are all guilty, charged of a crime, no matter how big or small it is; innocent does not run in our blood. We play life, gambling expectations from movies and false alarmed desires...Please, always be human. These words are for you to keep for as long as you breathe,” Vang writes to her readers—words of truth and encouragement.

Quill says: For those who love dystopian genres, Labyrinth provides fresh insight into the world of death.