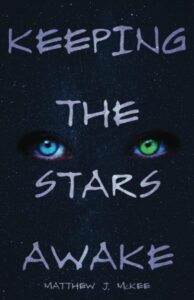 A typical teenage boy – gutsy, rebellious, imaginative, sarcastic – finds himself dead, reborn and on a wild crazy trip with a beautiful non-human female in this non-conforming narrative by debut writer Matthew J. McKee.

The story begins as this teen is at his computer, when a voice simultaneous with its text, comes out of nowhere, telling him to “listen and obey.” The voice identifies itself as the Author, the Storyteller, who, overriding the boy’s objections, delivers its message: “Don’t trust the woman.” Moments later a terrifying but beautiful woman, the Queen, appears crouching on his windowsill, inviting him to take her hand. Or die. Using her sword, she whacks him, and begins to cut him to pieces. As he lies suffering, he hears other voices and sees nasty white goo oozing out of his computer. When he recovers, he finds himself imprisoned, watched over by another female – a pretty, girl-like creature who identifies herself as a Sentry, not human but a homunculus, who has eaten human flesh to survive.

The teen is asked to name himself, and he adopts the moniker “Oh Ok” and dubs the Sentry “Sen.” Together, with a trust blooming between them after she assures him that he has died as a human and now occupies a place where creatures like her live forever, they will make an escape from the cell he has landed in, after he is allowed two wishes. The first is the return of his hoody, which will allow him to disguise himself as he explores his new realm, and then a huge supply of Kinder Eggs. He and Sen will confront the sword-wielding Bloody, Bladed Queen of All and such mystical figures as The King of the Dead and the Mole-Men, as they seek and somehow locate a way out of whatever newly arising dilemma they encounter.

McKee follows this whacky whirlwind with an Afterword in which he humorously seeks to explain – or further obfuscate – his intentions in composing a book in which he, the Author, makes several brief appearances to set scenes right and remind Oh Ok that he is still in charge of the twisted, tangled plot skeins. His work seems designated for a young adult audience, featuring the wild, unclassifiable, creepy adventures of an intelligent, remarkably self-assured boy who has no shame about his caustic “four-letter” language, and a pretty, but also cleverly sardonic and equally intelligent girl who guides him as a good female should, without domineering. He is brave, she is his supportive and devious plotter as they boldly go forth. McKee states that his writing endeavors began in an isolated Alaskan cottage, and indeed this tale seems to have come out of the nowhere that such a scenario suggests, and begs a sequel.

Quill says: Keeping the Stars Awake is a lively epic of youthful grit in a thoroughly unearthly setting that will doubtless appeal to lovers of madcap, high-speed fantasy.

For more information on Keeping the Stars Awake, please visit the author's website at: www.matthewjmckee.com/