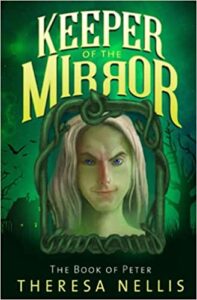 Author Theresa Nellis presents her debut young adult fantasy novel in Keeper of the Mirror: The Book of Peter.

In the opening pages of Keeper of the Mirror, we are introduced to Peter, a 13-year-old who constantly butts heads with his parents and prefers malevolence to kindness in every aspect of his life. One day, while trying to escape from his mother, he stumbles into the backyard shed with his dog, Sully, and uncovers an old magic mirror. Sully leaps directly at it, and to Peter’s surprise, rather than crashing into it, Sully disappears right inside the mirror. With Sully being Peter’s one and only friend, Peter throws himself into the mirror after him.

Once on the other side of the mirror, Peter finds Sully and encounters an old man with piercing blue eyes. As Peter gets to know the old man, he finds that he has more and more questions about him and where he originated. Together, Peter and the old man pass back to the other side of the mirror and find themselves in Peter’s backyard shed again. Shortly after returning to the other side of the mirror, Peter learns that the old man’s name is Bael. As they travel along together, Peter notices something strange about Bael. He seems to have the ability to control people when he looks directly into their eyes. Peter is in awe of this talent and begs Bael to teach him how to do it. Bael shows Peter a few tricks and explains that he is a dark elf who feeds off people’s dark emotions. Peter is ecstatic to learn that he possesses the same powers as Bael.

The first quest that Bael and Peter embark on together is to visit a children’s foster home under the ruse that Peter is Bael’s adopted son and Bael wishes to adopt more children to help run his farm. Bael and Peter successfully convince three boys to join their “family.” However, it is not long before the strange behavior of Bael and Peter causes one boy to run away in terror. The other two boys soon begin to fear for their lives and attempt to escape in their own ways. However, Bael plans to go to great lengths to ensure that the remaining boys will not be able to leave him freely.

Nellis’s debut novel presents a unique story of dark magic, villains, and fantasy for young adults. For a young adult novel, Keeper of the Mirror: The Book of Peter is a rather dark story. For this reason, this book would be best suited for readers ages 12 and up. Themes of hatred, mischievousness, disobedience, and dishonesty are prevalent throughout the story.

While the story itself is well-written, it must be noted that there are several formatting and grammatical issues present. These issues included: formatting issues with quotation marks, such as leaving them open when a character had finished speaking, and not starting a new line when a different character began speaking. These errors do not take away from the story; however, they should not be present in a published work.

Quill says: Keeper of the Mirror: The Book of Peter is a suspenseful story of mystery and dark magic. Readers who enjoy stories filled with adventure and fantasy will appreciate Nellis’s debut young adult novel.

For more information on Keeper of the Mirror: The Book of Peter, please visit the author's website at: theresanellis.com