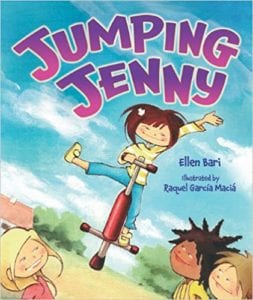 Jenny was a jumper and “nothing made her happier.” She jumped over everything from cracks on the sidewalk to Mrs. Fenster’s picket fence. Her face would light up and a beautiful smile would cross her face as she went up in the air. Boing, boing, boing … she even had a pogo stick to bounce on, but not everybody thought her jumping was cute or fun. When she was in science class there were caterpillars galore all over the room when she knocked over the caterpillar boxes. The other girls “snickered” and Mrs. Jacobs angrily frowned and declared, “Jumping is for frogs.” Jenny sure did have a slithering sliding mess of caterpillars to pick up.

When she toppled the hot lunch cart in the cafeteria the mess was worse than the caterpillar fiasco. There were potatoes all over the floor and Ms. Cohen, who promptly pointed to the door, yelled, “These cafeteria catastrophes must cease!” Jenny’s smile was gone and there was no hippety hoppity jump to her step any more. The other children began to poke fun of her by shouting “Ribbit! Ribbit! … Jumping is for frogs.” Her grandma became concerned when jumping Jenny was sad because no one seemed to like her jumping. Not one little bit. Grandma hugged her and said, “But your every ounce was made to bounce!” The class mitzvah project was coming up and they would be raising money for their sister school in Uganda. Mmmm, could Jumping Jenny use her skills to raise money? Boing, boing, boing …

This is a heartwarming story about Jumping Jenny who uses her “skills” to help out a good cause. Everyone has special skills, even if they aren’t appreciated by everyone as Jenny soon found out. Her passion for jumping did eventually enable her “to make a difference in the world.” The purpose of this book is to encourage children to do just that and Jenny’s attempt to raise money involved challenging herself to jump 1,000 times on her pogo stick. In the author’s note she briefly encourages children to participate in Tikkum Olam, which means “world repair,” to make a difference by helping those around us.

Quill says: This would be an excellent read and discuss book during circle or story time in the homeschool or classroom setting!