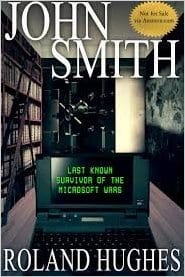 The Jobs vs. Gates debate may be the spark that comes to your reader’s mind when you first glance at the title of this book. However, the particular realm of computers and the digital industry does take a backseat when it comes to this well-written, yet sometimes extremely haunting tale.

Here we have an interview of mammoth proportions. A young woman sits down to speak with our lead character. This woman’s mother is the mayor of a city, and her father runs the newspaper in said city ... on Earth. Her basic job throughout the book is to question and learn from John Smith. Smith is a man who will feel a lot like the people you know and see each and every day. Smith complains, reviles, applauds, honors and debates our past - the things humanity did wrong that led to our eventual demise that took place on November 13, 2013.

This reporter goes into the interview with only one basic question on her mind: Why was it called the Microsoft Wars? But her interviewee can not simply state the answer. After all, the actual end came about from a history of errors and misjudgments occurring in everything, from religion to technology to the handling of diseases and healthcare. Therefore, John Smith takes our interviewer back through the old days to explain the foundation of humanity and how it disintegrated.

He was only eleven-years-old when Earth turned into the Earth That Was. When this ‘ending’ happened, John Smith watched the world change and split into a twelve-continent globe. He watched as the history, information and all that we were, did and said over time was completely lost. The new generation - the new Earth - would never understand who we were and what we were about because that data was now long gone. So taking on the huge weight of explanation, John Smith delves into everything from nuclear power to our War on Terror, throwing in things like Atlantis and King Arthur references as well.

This novel remains in an interview format throughout, which can become a little slow at times without a change of scenery or movement. Yet the dialogue given by John Smith will have readers nodding their heads at times, smiling at others, and most definitely feeling a bit chilled, as if they’re leading up to a Stephen King-type closure.

John Smith is a regular, average-Joe. He is not a democrat nor a republican and does not wish to express the views of any certain ‘side.’ In fact, he remains just like the rest of us at his core. We are a people who wonder if we will be annihilated. Is there a nuclear war on the horizon that’s yet to be seen? Will terror, or climate change; finance, or the basic greediness of our culture destroy us? There is no answer to that question as of yet, but this character and his views will certainly have you thinking about the many wrong avenues we’re walking down long after the book has come to an end.

Quill says: Part historical, part sci-fi, this story is definitely realistic and covers all debatable subjects when it comes to our people and our planet.

For more information on John Smith: Last Known Survivor of the Microsoft Wars, please visit the book's website at: www.johnsmith-book.com