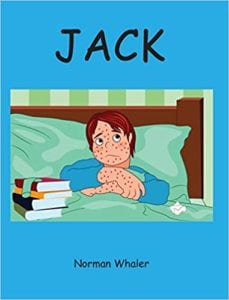 Jack is having a borinnnng day. He's sick and stuck at home, and actually stuck in bed. It's almost better to go to school!

Poor Jack! He has the measles and can't go to school. Well, honestly, he thinks the part about not going to school is pretty neat because there's always the TV or his video games to keep him busy at home. But drat! Mom says NO. As the story begins, Jack has forgotten that Mom was home and he started playing his gamepad, but when his mother called to him, he had to rush back to bed. Phew, that was close. But now what could he do?

Jack was now stuck in bed. His mother suggested he read a book to help pass the time. Really? thought Jack. Books are borinnnng! What could he do?

The young boy climbed out of bed and wandered over to his window. With a big sigh, he looked up at the clouds. Borinnnng, he thought again. But then Jack took a closer look at the clouds. It seemed that one cloud in particular looked like King Arthur carrying a sword. Jack could see, in the same cloud, the Black Knight fighting King Arthur. And what's that? Is that Jack, fighting alongside King Arthur? Now things were getting interesting.

As the cloud drifted away, Jack caught sight of another cloud. Was that a rabbit rushing down a hole? Jack's world was alive with adventures - adventures he knew about because of books! What fun!

Author Norman Whaler has crafted a creative story about a young boy who doesn't like to read. So many kids today want to sit in front of the TV, or play video games, and never experience the joy of getting lost within the pages of a great story. With a nicely flowing rhyme, Whaler shows children the adventures that await them in books. The illustrations, by Nina Mkhoiani, are bright and add a light-hearted feeling to the story. Add it all up, and Jack is a winner that you'll want to add to your child's bookshelf.

Quill says: Jack is a fun story that will entertain children and more importantly, show reluctant readers the joy they can get from reading.

For more information on Jack, please visit the author's website at: www.normanwhaler.com.