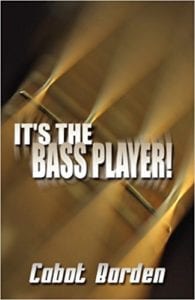 Mood rings, platform shoes, muscle cars and polyester leisure suits. Who doesn’t look back on the decade of the 70s with fondness for bad clothes and great music? For those of us growing up in the 70s, it was a carefree time to explore life and have some fun. For best friends Toby, Corey and Fred, it was a time to form a rock band and see if they could make it all the way.

Loosely based on the real life adventures of author Cabot Barden, It’s the Bass Player takes place in the early 70s and follows the three best friends through the ups and downs of playing in a band. Nineteen-year-old Toby is the main character, the bass player of Common Faith, and a generally all-around good kid. Nothing makes him happier than playing and being with his friends. As the story opens, the band is getting together to have a professional photo taken of the group for promotional uses. Corey is a bit apprehensive because he’s sure there is a jinx; every time a picture of the group is taken, somebody quits. And sure enough, shortly after that picture is taken, the first of many member changes takes place. But the group also gets a contract with a local agency that is able to get them bookings to keep the gigs, and money, coming.

Before the band can head out on a road trip to the first gig that the agent has booked, they have to play that Saturday night at the American Legion Post, the local dive. According to Fred, it’s the place where “old drunks that come in here drink enough to pickle them for the next hundred years.” (pg. 19) The place is too rough for the band’s female singer, Donna, who stays home, and the guys, too, barely make it out with their lives that night.

At last the band is on its way to stardom as they begin to travel to bookings that their new agent has signed. But travel requires money and a decent car, two things the band doesn’t have. Still, they have their youth and enthusiasm and start playing in more cultured places such as the Officer’s Club at the Columbus Air Force Base near Columbus, Mississippi. The clientele is much better behaved at the military base and the gig, where the band is a hit, is just the start of a wild and crazy ride through life in a rising rock group.

The author takes the reader through many adventures that Toby and his friends experience. Some will make you laugh - the car breakdowns, the gaggle of girls who start to follow the players, and the annoying audience member who was insistent he was a better bass player; others will make you shed a tear along with Toby such as the death of a dear friend. One in particular will make you angry, wondering why the boys didn’t come to the aid of a couple caught up in the hatred of racial bigotry. But then you remember that this memoir is based on real events and the band members very likely feared for their own lives. It doesn’t make it easier, but it does make it realistic.

While the story of Toby and his friends is an enjoyable ride for those curious about what being in a rock band is like, there are quite a few editorial and layout issues that detract from the pleasure of reading this book. The careful eye of an editor would really enhance the telling of Toby’s unpredictable life. There is also a nice selection of photos in the middle of the book, but with no captions, it’s anybody’s guess who/what we’re looking at.

Quill says: It’s the Bass Player! is a wild look into a teen rock band that, with some judicious editing, could be a really fun story.

For more information on It's the Bass Player, please visit the publisher's website at: www.publishamerica.com