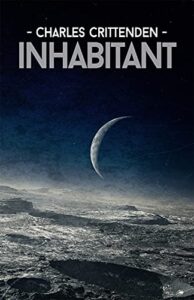 In poetic reverie, an earthly being leaves his planet, and alone or at times with others, he navigates through space and time, giving him moments of insight: why did he leave Earth? Can he return? Does he truly want to go back?

A four-part saga in free verse with intriguing spacings and clusters of words, Crittenden’s work begins when he, as the first-person narrator, realizes that he has fallen, broken his heart, and no longer experiences the sensation of earthly gravity. Where he awakens is an alien landscape, fiery and seemingly timeless. He begins to feel regrets for his former life mistakes, blaming his new condition on events of the past, even as he is flying, perhaps in a single-man craft, through darkness, observing his former planet from far outside and above it:

a ship to find a home,
built for one intergalactic passenger,
with only what I need to survive.

As he speeds through darkness, he sees constellations up close, bringing memories of the science books he read as a child. He finds a spider in his ship, eventually accepting it as his friend and companion, just as he has accepted his fate as a space traveler, with stations to visit and explore, and ever-changing visions of the solar system he once called home. He notes that those on his planet take it for granted, just as he once did:

never planted what I ate, never returned the trail how I found it,
never saw its majesty.

He begins to wonder if he ever lived on earth at all. Occasional unnamed others join him to explore new realms, but ultimately he journeys alone but for the spider, not finding what it is he seeks, what he left behind, and once concluding, “no matter how far I travel, I’m an alien.” His final destination will be – unknown.

Crittenden as the poet’s yarn spinning “I” writes with the plain statements of a practiced wordsmith, but always with an etheric feeling that borders on Zen meditation. He, the inhabitant now without a place to inhabit, is constantly thinking, remembering, and wondering, as his reader will, what can happen next. One may surmise that his lonely space trek is an elaborate metaphor for piecing together the events of his life and trying to make sense of them. But the true intent lies securely hidden in the mind of the poet, and readers will make of it what they will. What is most significant is that they will enjoy the trip and admire Crittenden for bringing it to the printed page.

Quill says: Charles Crittenden’s Inhabitant is a journey of closely held inner speculation and far-reaching outer realities, a rich combination of psychology and sci-fi couched in poetic episodes and offering much food for contemplation.