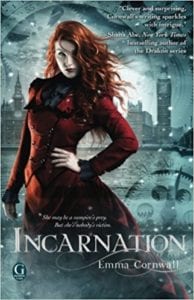 Bram Stoker knew what he was writing about…but do the rest of us? Before you vampire ‘haters’ out there wish to disregard this one as ‘yet another fanged ones book,’ you really need to reconsider. The author has created a truly stunning work with so many twists and turns that readers will have NO idea who’s bad, good, in charge, searching for power - OR, who Dracula really was.

We begin in 1897, sitting beside Lucy Weston as she is mesmerized by the opera playing out on stage. It is her twentieth birthday, and she knows that her parents and her sister are only there to be nice (they really had no interest in the performance.) Oddly enough, however, Lucy’s ‘sight’ seems to go a bit awry. Where there was once singers performing, now there is only one man - a seductive, handsome man who seems to be calling out to her as if she is his one and only.

As the image fades, Lucy wakes from and finds herself buried in dirt with a piece of wood sticking out of her chest, and desperately clawing her way out of the grave. She really didn’t have to worry very much considering she was (sort of) dead already. As the ‘light’ begins to shine on her memories, images come back to her. She also finds her house, completely abandoned as if her family was chased away by something monstrous.

Lucy goes on the hunt to meet Bram Stoker and ask him why, exactly, he turned her life and murder into some silly piece of fiction. Not to mention, if he knows so much then he HAS to know where she can find this ‘Dracula’ creature and get some answers!

Walking through the gritty, macabre world of steampunk London, Lucy finds herself becoming embroiled with a man who comes from a long line of hunters, as well as a woman who wants nothing more than the power she feels she’s owed. And when readers find out how two legendary stories are interwoven where Dracula is concerned, they will be enraptured with Incarnation until the very end.

Quill Says: From the characters of wolves, unicorns, trolls and more, this one has it all - and the ‘cool’ Lucy is a great main character!