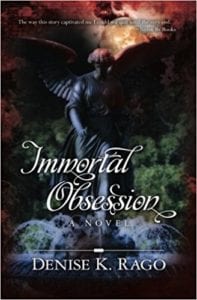 Denise K. Rago's vampires are beautiful, cultured, and eternally youthful. They are not especially dangerous to humans-- most of the time. Immortal Obsession is set in present-day New York and flashes back to France during the 18th Century, where Christian DuMauré and Michel Baptiste lived as humans before becoming vampires. Throughout the centuries, the vampires have rubbed elbows with the human aristocracy. In modern New York they run a popular club, The Gray Wolf, wear fashionable clothes, and live in expensive homes.

Many humans are drawn to the glamour that surrounds the New York vampires. Though some of them are “donors” of blood, this does not harm them or turn them into vampires. The Gray Wolf is always crowded with mortals who want to be part of the scene.

The vampires are extremely dangerous to each other, however. On the whole these beautiful vampires are vain, jealous, and hungry for power. They hold grudges for centuries and will go as far as destroying each other for revenge. Two humans, brother and sister, find themselves caught in the middle of a fight that began many generations before they were born.

Happily for Amanda and Ryan Perretti, there is one vampire who is different. Christian longs to fill the endless years of his immortality with a sense of purpose and with love. Unlike the other vampires in Rago's Immortal Obsession who were attracted to the power, Christian chose immortality to be with someone he loves, his friend Michel. He continues to be different from the rest more than two hundred years later, still loyal to Michel, and acting as protector to generations of descendants of a mortal woman he knew in 18th Century France.

Rago allows readers to be part of the vampires' world from the safety of our own homes. At first glance Amanda, a hard-working single woman in her twenties, seems like a fairly ordinary person, and readers will easily identify with her. As Amanda begins to discover that her life is anything but ordinary, we are drawn with her into a world both alluring and frightening where the major players are immortal.

This story is really about the vampire characters, especially Christian. Rago leaves the details of Amanda's life somewhat vague. We know that she is a smart, likable person, who has suffered some sadness in her life. Because there is room to imagine Amanda as we like, it is easy to see New York and the world of the vampires through her eyes. Rago describes the physical surroundings in detail, bringing them to life. The backdrop is beautiful, filled with art; it is also increasingly dark.

As Amanda spends more time with Christian, the action is more often at night. Dark scenes will fill readers' minds, making the book feel almost like a remembered dream. The experience is like a dream for Amanda, too, especially the romance with a lover, beautiful and devoted as anyone could imagine, who only appears at night.

The pacing of Immoral Obsession is excellent. Rago keeps her readers in suspense right down to the last page. Amanda is trying to discover why vampires in New York and Europe are so interested in her. Readers put the pieces together with Amanda. The plot never stalls; the events in New York move forward, as we gather key pieces of information from conversations and flashbacks. The action finally culminates in a scene that would be perfect for a vampire film-- with plenty of drama and visual appeal. Overall, Immortal Obsession is a vivid and engaging novel that combines romance and suspense.

Quill says: Glamour and danger mix in a dark combination of romance and suspense.

For more information on Immortal Obsession, please visit the author's website at: www.denisekrago.com