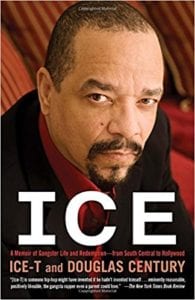 He gained notoriety as a rapper, drew more fame for his role on Law and Order: Special Victims Unit and today continues working within both the music and television industries. Known to his music fans as Ice-T and to television fans as Detective Odafin "Fin" Tutuola, he’s had an amazing career and shows no signs of slowing down. This memoir is a no-holds-barred, bare-all look into the life of Ice-T.

Born Tracy Marrow in Newark, New Jersey, Ice-T spent his early years in Summit, New Jersey, a middle class town. His parents weren’t exactly nurturing and so Tracy learned to take care of himself and show no emotion. Indeed, he didn’t cry when his mother died when he was seven, nor did he shed a tear when his father passed just four years later. He admits that he had become detached and it wouldn’t be until years later that he cried for the first time when a close friend died.

Orphaned at twelve, Tracy was sent to live with an aunt in Los Angeles, another less-than-caring adult. After finishing up middle school in a predominately white school that he was bused to, Tracy made the decision to go to Crenshaw High, an inner city school within walking distance.

It was at Crenshaw that “Trey” (Tracy sounded too girlish for the street-wise fledgling gang member) learned about gangs, girls, and how to stay out of trouble (or get into trouble, depending on the circumstances). By the time he graduated, Trey had a daughter and needed to find a way to support her.

Trey found himself in the Army, stationed in Hawaii where he served four years. It looked like life had turned around for him but unfortunately, once back in Los Angeles, the gang life sucked him back in.

As a big Law and Order fan, I wanted to read this memoir to get the scoop on the life of one of the actors. As a nerdy white woman, I admit I wasn’t up on Ice-T’s pre-Law and Order days. I knew he’d been a rapper but beyond that, I didn’t know much. I found this book fascinating – Ice-T spares no words in describing life in the gangs, how it sucks inner city kids in and spits out dead or jailed adults.

There is far more in this book on Ice-T’s rapper career than his acting career so if you’re looking for an in-depth, behind the scenes look at his movies or television appearances, you may be disappointed. However, if you’d like to know how Ice-T’s musical career got started, how Body Count was formed, what was really going on when “Cop Killer” gained national attention, and how a bad car accident helped turn him from a life of crime, pick up a copy of Ice.

There are plenty of anecdotes spread through Ice such as the time Ice-T was planning on taking a part he needed for his Porsche from a friend’s stolen vehicle. As he broke into the car, several young fans saw him and ran to him for autographs. There is also plenty of street “lingo,” from licks, to being a “spot,” to bangers. If you’re not familiar with such terms, you certainly will be by the end of this book. And speaking of language, there is a lot of colorful language in this memoir. I don’t mean a four-letter word here and there, but an abundance of curse words spread throughout. I realize this is part of the gangster life, but in a book, it gets old after the first 50 pages. Beyond this one criticism, I found Ice to be an absorbing look at a rapper’s life.

Quill says: Fans of Ice-T should enjoy this no-holds-barred memoir.