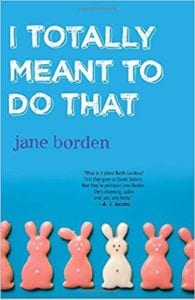 I have toiled and toiled over how to write this review in the standard third person format. But, quite frankly, with a story that touches me on so many levels I have to say what comes from my own heart. This is one of those fun, witty, zany, charming stories BUT with so much emotion, truth, and realism that everyone from all sides of the country will want to pick up and read this one immediately.

This is not only a memoir – this is an absolute love letter written by a woman completely and utterly engrossed in the home that bore and bred her, and the home that raised her and taught her so many things on so many levels that she will never forget it. In fact, this belongs in one of those filigree golden frames that are the perfect setting for a lyrical, unforgettable “ode.”

Welcome to “Ode to New York.” Jane is the classic southern character. Born and bred in a small town in Greensboro, North Carolina, Jane is used to waking up in the morning and saying hello to her next door neighbors as they water their lawns. She’s used to everyone in town knowing her business, and the happy smiles she receives from every one of the town’s citizens. She was named after her hysterical Aunt Jane who is the true Southern mistress; a woman who prides herself on the gentility and “presumed” kindness that the South offers in spades. Aunt Jane also knows everything about etiquette and manners, and detests the locations out there in the world that are simply smelly, mean and violent. So when the young Jane decides to hit the road and head for New York City, her Aunt almost has a heart attack.

But Jane goes…she flees to a city that immediately makes her feel like she’s an alien who has landed in the middle of a fast-paced world where people barely look up at you and, when they do, usually offer a one-finger salute in response to Jane’s smile and stare. What Jane wants more than anything is to high-five everyone on the street – all eight million strangers who pass her by on their way to something far more important than her.

Jane becomes slightly fearful of the big, bad city but there are certain benefits that she wouldn’t trade for all the mint juleps on the planet. She suddenly finds out that she can go to a bar and kiss a complete stranger without having this printed in the local newspaper; and she can wear ratty t-shirts and torn jeans on the subway and absolutely nobody cares. Jane is amazed that she can engage in somewhat “bad” behavior without any gossip being strewn across town. She’s absolutely beside herself that she is living in a place where not one person knows her mother, and not one person is studying her every move.

The stories that are told by Ms. Borden are absolutely hysterical. From getting out on the wrong side of a cab and getting whacked because she was too busy admiring the Flatiron Building, to a full-size mirror falling on her head in a theatre’s bathroom, Jane has the funniest adventures as she tries to work her round peg Southern charm into the square hole of a city she can’t quite understand.

The author goes into the explanation of the 150 year prejudice that still exists between the southerners and the Yankees – how Northern Aggression still lingers in their minds. She offers true, yet hysterical explanations of the difference between “you guys” and “y’all,” as well as how the New Yawkers POV sees southerners as simply Rednecks or the cast of Deliverance.

From her relationships to her multitude of jobs that include a temp in the World Trade Center, a waitress in a legendary West Village brewpub, as well as a secret shopper/spy who finds herself frightened in Chinatown, every chapter offers pure fun and a new way to see the North and the South through the eyes of someone who desperately loves them both.

For anyone, like me, who has fled the small town life to race to the big city and enjoy its anonymity, this is the book for you. I personally got a kick out of it because I was the same but opposite – a Yankee who wanted to see exactly what these big Southern cities had to offer. The culture and social shock of the whole experience was one of the best of my life, proving that perhaps we would all benefit from seeing ourselves through someone else’s eyes.

Quill says: A fantastic read that will have you falling madly in love with the Empire that is New York City, and the courage, strength, faith, and sense of humor a person needs to make it their home.