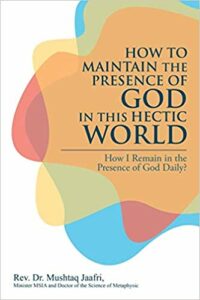 In his newest book, How to Maintain the Presence of God in This Hectic World, author Mushtaq Jaafri, a Minister in the Movement of Spiritual Inner Awareness (MSIA), offers a glimpse into his personal contact with God, showing its origins and gradual evolution.

As Dr. Jaafri emphasizes many times, he experiences not merely daily but constant communication with God, talking to Him and consulting with Him “24/7.” He recognizes that he has a physical being, which he has come to regard as something akin to a movie that he watches and performs in, while fixing his mind on the separate, higher reality of God’s presence. He likens this to being able to listen to a sermon while drawing a picture or making a list. He believes that God dwells within him; connecting to Him took practice but by now, it has become “second nature.” In daily life, he splits his mind; one half is involved in worldly activity and the other, in spiritual exercises.

Jaafri is careful to distinguish between religion, which entails rituals, and spirituality, which is a free and open expression of God’s continual blessing. The examples he uses from conventional religious literature are few and mostly draw from Christian themes such as Adam as the first man and first sinner. Jaafri often uses examples from his own life to explain the development of his convictions. He sees himself as having left the heavenly realm to live with a family that he chose: a brilliant father and generous, kindly mother in Pakistan. Their decision to send him for education in the US led to the discoveries he has made of the higher realms of perception, an ascent beyond the physical to astral, causal, mental, etheric and soul consciousness. Contact with MSIA and its founder John-Roger had a profound effect on his understanding, so that, as Jaafri often stresses, for more than forty years he has enjoyed a state of higher awareness.

Jaafri writes with sincere conviction, using simple examples as needed in his attempt to convey to his readers the ease with which they, like he, may access this special knowledge and contact. He once had a total financial collapse after poor investments, and looking for an understanding of that catastrophe led him to many revelations, and ultimately, to the sense of comfort he has gained in the realization that he can control his thinking and free his soul to the sense of the immediate, constant presence of God. His book expresses his wish to share both this knowledge and certain techniques that would allow others to experience this awareness, “right here right now.”

Quill says: Dr. Jaafri’s insights can serve as an inspirational guide for sincere seekers who are prepared to go a step beyond the usual boundaries of thinking about higher realities to experience inner peace.