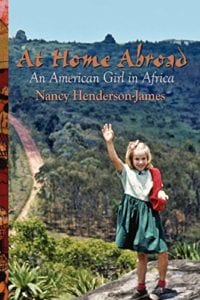 In At Home Abroad, author Nancy Henderson-James recounts her childhood in Africa. As the daughter of missionaries, most of the author’s early life was spent in Africa, in places such as Lobito, a bustling port city in Angola, located along the coast of the Atlantic Ocean.

There is no doubt that Henderson-James had a rather unusual upbringing, one touched by fascinating and unique events, unlike any of her American counterparts. The memoir begins by telling of the author’s father, his intense beliefs and dedication to his work, and the many people who came to worship at his congregation. Soon the reader is taken away to school with Henderson-James and then, follows her through her teenage angst, all the while surrounded by the African countryside and personality.

This book is replete with the splendors of Africa, from the people, to the animals and landscape. The author introduces many wonderful Africans including the household staff and Tezinha, a toddler who lived with Henderson-James’ family and enriched their lives until one day they had to return her, crying, back to her family through a train window. Experiences, so foreign to Americans, come to life as the author recounts many events such as the annual hatching of flying ants and the ritual of gleefully eating them, one crunchy fly at a time. She tells of Chico, their pet baboon, definitely a pet few if any Americans have any familiarity with, as well as the growing political problems that would eventual force her to leave her beloved Angola.

Where this book shines is in the relationships between the American missionaries and the inhabitants of Angola; their differences and similarities. Slowly, as the author grows, she comes to realize the disparity between the two. Comments such as,“My world was wealthy and protected. And white. But in every interaction between black Angolans and white Portuguese danger skulked,” and “Mulattos the cinnamon ones were called in town, in a sneering tone that made me look at them and wonder what was wrong with being mulatto,” help to open the reader’s eyes to the injustices that abounded all around the missionaries. The disparities between the two communities are fascinating and the true draw of this book.

Unfortunately, the author gets bogged down with too many personal anecdotes that have little or nothing to do with Africa and are simply the daily rituals of any child. Beyond that, she seems to have something of a fixation with bodily activities that are truly unpleasant to read. The first inkling of this appears in the first chapter where Henderson-James recounts wondering, while sitting on the toilet, if God was ever present, then he must be in her bowel movement. Further in the book, she relates other experiences, from wondering about male body parts and trying to see what it would feel like to be a boy, to dropping excrement along a school hallway. Yes, these happened when she was young, but they add nothing to the memoir.

Quill says: A good book that could be a great book with a bit of editing to remove far too many personal and sometimes repulsive stories.