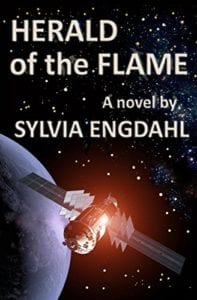 “I’m not some sort of superman...I’m merely a star pilot who happens to have some uncommon mind skills…” explains Terry Steward to some new friends mid-way through Herald of the Flame. As the reader will have already learned, however, Terry is selling himself short - he just might be the savior of the human race.

As the story opens, we meet Terry Radnor who is using the name Terry Steward to protect himself from his many enemies. The reader is given the backstory on Terry, once a respected Fleet officer, who was gifted with extraordinary psi skills and had been trained on the planet of Maclairn, where a secret colony of people existed who encouraged psi skills. He was imprisoned on Ciencia for encouraging people to hope, hope for ending the repressive government rule that they lived under, to change the censorship laws, to live freely and develop their own psi skills. He had been arrested, jailed, escaped and while on his way back to Maclairn, had discovered that his passengers were terrorists bent on destroying that secret colony. With no real options, he crashed his ship, killing all the passengers and almost perishing himself. The Elders, aliens unknown to all but Terry, had saved his life and now he was free to travel in his spaceship Estel.

Now, before Terry makes his permanent escape from the dreary, always overcast planet of Ciencia, he seeks out Alison Willard, the woman he loves. Together with Jon Darrow, a top-notch pilot, and Gwen Morrell, a maintenance engineer, they take flight to spread hope to other planets. The problem is, some people, particularly those in power, will do whatever they can to stop Terry. It doesn’t help that Terry broadcasts a message throughout Ciencia as they fly away to encourage dissent against the tyrannical government.

Faking an accident in the hopes that their pursuers will think they all died, the small crew destroys the Bonanza, their temporary ship, board the Estel, and head into deep space. Using smuggling as their cover, Terry and the others visit various worlds to bring the future he foresaw to all humankind. That future? A time where the powers of the human mind are accepted by all, where once those abilities are fully developed by everybody, the oppressors will no longer be able to maintain their control.

Herald of the Flame follows Terry as he travels to various planets, smuggling some interesting cargo, while he and the others hack the ‘net’ on these worlds to bring their message to the people. Messages soon go viral which is, of course, what they want, but it also brings out the government agents who will do anything to maintain power. Danger is in abundance, with many close escapes as well as tragedy for the crew.

Having not read the first book in this series, Defender of the Flame, I wasn’t sure how easy it would be to get caught up in the story. Actually, the prologue had me intrigued and I was hooked within a few pages. There was a bit of a lull in the action while Terry explained to Alison and Jon (and by default, the reader) what had happened to him prior to their meeting (book 1) but once that’s done, the book takes off and gives the reader a very satisfying ride. There were some very clever (or more accurate - cool!) events such as Terry getting caught via a force field that allows people to enter but not exit, the colony world of New Afrika which was settled by emigrants from Africa, and how Terry could use his psi to help ease a person’s pain level, all of which kept me intrigued and wanting to find out what else was in store.

Although the ‘cool’ concepts were fun, the real draw of this novel were the parallels it drew to today’s society. The whole idea of an oppressive government taking control seems all too real. At one point, Terry noted, “People sometimes vote away their own freedom...and I see nothing wrong in attempts to make them aware of that...people being harassed, even killed, because they believe unorthodox ideas…” (pg. 185) We also meet an ‘evolved’ Ku Klux Klan that has brought hate to a whole new level. What has happened through people’s complacency, and how Terry and his friends fight to right it, will have you turning pages quickly.

Quill says: A futuristic ride that has many parallels in today’s society. This is a ‘thinking man’s’ science fiction book – the type we need more of today!