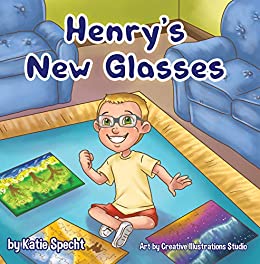 Getting your first pair of glasses can be quite scary for any child. Recognizing this common fear, author Katie Specht set out to help ease the anxiety with her charming new book, Henry's New Glasses.

Henry is a young man who loves doing puzzles, they're fun and challenge his creativity. As the story opens, Henry is working on an awesome puzzle that has lots of brightly-marked fish, as well as sharks and jellyfish swimming about. Henry has done the puzzle before and enjoyed watching the picture come to life, but today is different. Today he can't seem to get the pieces to come together. As he struggles with the puzzle, he asks his dad, "...why do these pieces not fit together today?" Henry's dad realizes that his son may need glasses and it's time for a trip to the eye doctor.

Henry's father sits down next to Henry and does his best to allay his son's fears about getting glasses. However, Henry isn't convinced that a trip to the doctor is a good thing. After his dad explains what the doctor will do, Henry agrees to go, but he's still nervous about the visit.

The day of Henry's eye doctor appointment arrives and off he goes with his dad to the doctor's office. There he sees all sorts of cool equipment. Trying his best to hide his nervousness, he soon becomes excited to see how all that neat equipment works. After Henry's appointment, it's time to get his glasses, and then go to school. But nobody in Henry's class wears glasses so what will happen when the young man shows up with his new, gray-framed glasses?

Henry's New Glasses is a sweet story about an issue that many youngsters are faced with - glasses. The author handles the fears that come with new glasses - will they help, what happens at the doctor's, will my friends make fun of me - with the understanding of someone who has guided her own child through the process. Watching Henry go to the doctor's office, and following along as he looks through lenses, and read letters from a chart, will help alleviate fears of children who don't know what to expect. And the author manages to slip in little things that kids will love, such as discovering that the chair Henry sits in goes up and down. There's a minor issue with the editing of dialogue (dialogue between Henry and his dad all in one paragraph), but it's not anything that would keep children from enjoying the story. Henry's New Glasses is a perfect story for parents to share with their children who need to start wearing glasses.

Quill says: A delightful story that will likely help ease youngsters fears about getting glasses.