Hannah Reborn: Maturing and Healing the Soul Beyond Organized Religion 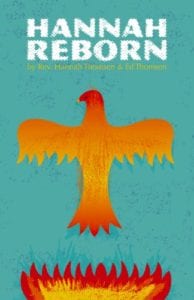 Hannah Reborn: Maturing and Healing the Soul Beyond Organized Religion

It seemed as if Hannah Ljungstrom simply woke up one day and found herself married to someone she hardly knew at all. The only apparent commonality was that they were both members of the Church of Jesus Christ of Latter-Day Saints, but within a few years she would be shocked when she discovered Ed did not share her passion for the church. She had given up her family, her friends, and her beloved Copenhagen to be with a man whose simple courtship began with a pink letter of all things. He paid her airfare to Missouri and the next thing she knew she was married and living on a goat farm. Ed Thomsen, who was much more confident, knew she would be his wife because it was destined as his grandmother had foretold this marriage.

Ed and Hannah were married in an LDS temple in Switzerland by a priest who sealed their lives together for eternity. Hannah’s faith was of the utmost importance to her as she claimed, “I had a deep burning desire in my soul to only follow God’s way to be completely faithful to the one church I believed was the only true church on the face of the earth.” (pg. 52) She was an orthodox Mormon as would be her sons Matthew and Samuel who soon arrived on the scene, but little did she know that her beloved husband was keeping secrets from her. He believed in reincarnation, aliens, spirit guides, and extraterrestrial civilizations. Their lives began to unravel and “earthshaking disagreements” would rock their world when Ed began to reveal the origins of his children. He bluntly said to her, “I believe they have lived before and that Samuel is the prophet Samuel and that Matthew is the apostle Matthew and that they have been reborn.” (pg. 98) No, no, no … it was not possible. It was just crazy talk.

Yes, according to Ed, it was true and there was another revelation he had that had to be made: “You are the Hannah told of in the Old Testament and I am Peter, the apostle of Jesus Christ. We have been reborn in these last days and Heavenly Father loves us very much.” (pg. 99) His claims were obviously nonsense and she seriously began to think they “both belonged in the insane asylum.” Hannah began to experience panic attacks so frequent and intense that she had a breakdown, but then she began to see the light. She began to experience encounters with Jesus, Moses, Zipporah, Evah, Deborah, Elijah, Demeter, Eloi, and the Aesir. It was a comfort to her and she later claimed, “In all of [those] experiences I was given love, and all of the beings showed me that they cared about me.” (pg.138) It seemed that Ed was indeed correct and began to insist that she choose. Would she elect to stay with her church and her husband, or would she choose to experience and live this new life being offered to her?

This is a very powerful, candid autobiography that was obviously very revealing and difficult to write. Several times Hannah stated that she would understand perfectly if the reader thought that she was crazy because, in essence, the material presented in this book is on the outer limits of most people’s belief systems. I do have to admire her courage in not holding back any information, including the fact that she had a breakdown. The Thomson’s lives are primarily told from Hannah’s vantage point with Ed contributing to the dialogue a few times in the main text and once again in the appendix. The most striking juxtaposition is the belief system of The Church of Jesus Christ of Latter-Day Saints versus that of those held by the New Age spiritual movement and Hannah’s coming to terms with them in her life.

My only objection was that the basic promotional descriptions of the book (not on the book itself) were rather confusing as they subtly indicated that this book would more than likely center around mainstream religion. This obviously was not the fault of the authors, but rather that of the publisher. One message, tucked in the back of the book by Hannah says, “God is ultimately found within each and every heart that seeks, deep within the confines of our souls as we each reside within the heart of God.” (pg. 313) This is a story of a life, one very well expressed in light of the many struggles she had to face and if you take the time to journey with Hannah she will embrace you with her heart, soul, and love.

Quill says: If you want to follow a woman's life from the world of The Church of Jesus Christ of Latter-Day Saints to the mystical experience of a world you may never know, simply follow Hannah, a woman reborn.

For more information on Hannah Reborn: Maturing and Healing the Soul Beyond Organized Religion, please visit the publisher's website at: www.outskirtspress.com