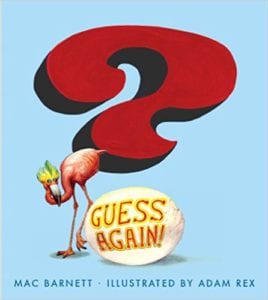 Guess Again is a clever little book that asks young readers to figure out who (or what) is hiding on the next page. With short little rhymes, and drawings that conceal the mischievous culprit, in silhouette, with a folded over page or a little hole with a nose (is it really a nose?) poking through, children are asked to guess the identity of each character. The catch is that the answer is never the one that both the poem, and logic, would lead a child to guess; thus the title, Guess Again.

For instance, on a page with a frightened knight and the outline of what appears to be the mouth and teeth of a big dragon, the accompanying poem reads:

“Who’s got white teeth and fiery breath
And scares Sir Frank the Brave to death?
This frightened knight must stop his braggin’.
Who’s spooked our knight? That’s right! A

Opening up the folded over page, the reader meets:

The dentist, all smiles, is holding a giant toothbrush that gives the outline on the previous page of a dragon’s head.

The poems in Guess Again are fun and goofy and youngsters are likely to get a lot of enjoyment out of trying to out guess the author. I suspect there will be plenty of giggles involved. I’m not sure how well the book will do in the category of books that get read over and over and over. Once the mystery of the hidden character is solved, children may move on to another book.