Grieving a Soulmate: The Love Story Behind “Till Death Do Us Part” 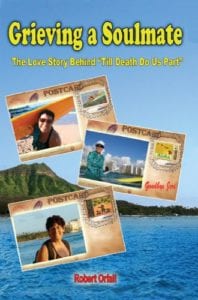 Grieving a Soulmate: The Love Story Behind "Till Death Do Us Part"

Jeri and Robert were young, beautiful and the loving look in their eyes told everyone they were destined to be soulmates. In the late seventies they began their lives together and in time their identities became intertwined. Throughout the years the simple touch of a knee or the twinkle of an eye were captured in photographs. The invincibility of youth denies the inevitability of death and as they lived, loved, and worked together, the Orfalis never gave it a passing thought. It wasn’t until Jeri was diagnosed with stage three ovarian cancer that they were jolted into an unwelcome reality. Society, perpetually living in a state of denial, didn’t talk much about death and it wasn’t until Elizabeth Kübler-Ross began to write about it that we began to listen. When Jeri began to die, Robert began his desperate search in an effort to learn how to ease his lover’s transition from life to the unknown throes of death.

Jeri was a free spirit and strong. First it was the surgery, where they first encountered the colostomy bag, they humorously dubbed, “Rosie.” The unpredictability of chemotherapy and its side effects were daunting, but Jeri and Robert would weather its stormy seas for ten years after her diagnosis at the age of forty-seven. It was unfathomable that a “surfer girl,” who was so athletic and lithe would one day say to the love of her life to “Please make sure I do not suffer at the end. I don’t want pain.” (pg. 20) Soon after the plumerias drifted down to the ocean at Jeri’s “surfer funeral,” Robert’s pain began. He later claimed that “Thirty years of my life had just vanished into thin air.” (pg. 76) The grief was overwhelming and Robert was inconsolable as he searched for the touch of a soulmate who was no longer there. Only Jeri could have helped him, but she was now a part of their beloved Hawaiian surf. The constant grief bursts that threatened to take over his life were practically nonstop, but what could he do?

Robert instinctively realized that “One of the big challenges for grieving soulmates is how to disentangle the interlocked identities. As a soulmate, your identity is totally fixed with that of your partner’s.” (pg. 66) He began to read nonstop about death and dying, from the medical, intellectual, and self-help, to the existential texts. He didn’t want to find himself a victim of “complicated grief,” but rather wanted to help himself out of an abyss that could destroy him. Robert wanted to hold Jeri into his heart, but also wanted to rid himself of the pain. He began to separate what was useful in the books and discard the psychobabble. He listened to the experiences of Dr. Joyce Brothers and pondered the advice of the likes of Dr. Katherine Shear. It was after he absorbed and sorted through thousands of pages that Robert formulated his “grief cure,” a cure that would not only help him, but also others. Their loved ones would be remembered and the grief bursts would lessen and stop.

This part self-help book, part memoir, and tribute to Jeri, Robert Orfali’s soulmate, reaches out to anyone adrift in the chaotic world of grief. The grief that could have destroyed him became a catalyst with which he could help others along their path to recovery. His search for a “cure” from his pain led him through a literary litany, much of which proved to be useless in the long run. Robert does discuss many of these works telling the grief stricken what helped him the most and how these theories helped him formulate his own. The grieving process is different for each person, but I feel that many people will be able to benefit from his difficult journey and “grief cure.” Robert stated that “I needed something to help me immediately forget the last few days of Jeri’s battle with cancer.” (pg. 68)

Part of this healing process included the development of a website to her memory where the reader can absorb her spirit more fully in photographs and videos as this book does not include photographs. The conversational writing style cannot match the prose of C. S. Lewis, nor is the information contained in these pages akin to medical dialogue (nor is it intended to be), but it is written from the heart. This is the aspect that I liked the most and am finding the most useful. I feel this book could be best utilized by someone attempting to mentor another as they grieve, but can also be used by the individual. I am mentoring someone who lost their soulmate recently and in an effort to help, took down pages and pages of notes about Robert Orfali’s process. Simple, heartfelt sentences such as “It was like having a non-stop conversation with her in my head,” are very comforting to the grieving, who want to know they aren’t alone.

Quill says: This book is a journey, a journey that hopefully will end in comfort and joyful remembrance of those we’ve lost.

For more information on Grieving a Soulmate: The Love Story Behind "Till Death Do Us Part", please visit the book's website at: www.GrievingaSoulmate.com