Grief and Her Three Sisters 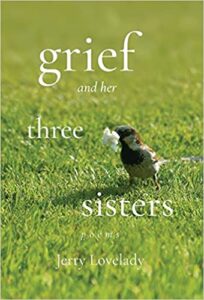 Grief and Her Three Sisters

Poet Jerry Lovelady has here assembled imaginative works focused on the sadness and sense of frustration and finality that life events can sometimes summon.

The volume is arrayed in four parts. Part One, The River Gods, sets the reader on the poet’s journey, its title declaring “The Great River Taketh.” In it we see that a river has stolen sufficient topsoil to reveal a patch of wild onions, recognizable by the “pale, white florets” that appear in May. Despite his mowing around them to preserve their beauty, Lovelady knows that even his mowing is killing millions of other life forms, and more will tenaciously arise to cover and devour. Nature, he concludes, is a transforming, transfiguring process. This same force is explored in “Our Cabin the Woods” – a cottage also affected by river’s flooding.

Human love and devotion are expressed in Part Two, Love’s Bind Shambling, beginning with a look at “My Two-Dimensional Refrigerator Universe” – an appliance coated with photographs that go back generations – “infant, to toddler, to teen, to adult.” In “Thrown Away,” the poet laments the gradual diminution of love, signaled by “red flags which you erected around yourself.” Part Three is emotively entitled A Rhapsody for Contrite Hearts, in which humor is injected by way of letters written to Thor during a heavy thunderstorm, in “Godlike and Unafraid.” The closing portion, Simple Songs of Meager Understanding, concludes with an exhortation: “Move Your Mountain” suggests that despite the apparent challenges of grief, it is possible to “dig till you find yourself.”

Lovelady’s eponymous “Grief” is personified as a widow with three sisters who contribute “Memory,” “Vain Hope,” and False Pride” – “characters” that many a sorrow laden reader may have encountered. And though the general theme may be morose and mournful, many of the pictures that Lovelady paints here offer the long term, much awaited prospect of happiness. The author has published a previous work – Other Worlds, in Other Words – and it is obvious from the Grief gathering that he will have much more to say, promising a next volume by the end of the coming year.

Quill says: Jerry Lovelady is clearly devoted to the art and crafting of poetry, equally at home in free verse or rhyme, with subjects ranging from stars and mythological gods to simple, homespun touches - enjoying hot cocoa and doughnuts in childhood, sweeping a roof or mowing the lawn in manhood.

For more information on Grief and Her Three Sisters, please visit the author's website at: jerryloveladypoetry.com