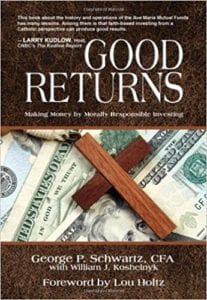 In 1931 Pope Pius XI expressed the “vital connection between economics and morality in” his encyclical, Quadragesimo Anno. The gist of the message was not forgotten and was later reiterated by Pope John Paul II in 1991when he stated that “economics can’t be separated from religiously based moral discernment.” The stance of the Church on the connection has remained virtually unchanged throughout the years and its “ethical awareness” was taken on by a small group of investors. Many investors began questioning the efficacy and moral character of individual company dealings. Are stocks that deal with companies who invest in pornography, have little regard for the “inviolability of marriage,” and, most importantly, have no regard for the sanctity of life worth investing in?

The viability of a Catholic mutual fund “that would examine stock from the specific perspective of Catholic moral teaching” and “would not buy shares of firms supporting abortion” could prove to be a tough sell. (pg. 20) There were brave, determined souls like Tom Monaghan, founder of Domino’s Pizza, and other influential people such as Bowie Kuhn who would sign on and eventually help make Ave Maria Mutual Funds a reality. The SEC application would be extremely challenging and there would be many “nit-picking objections.” In fact, it was snidely mentioned that, “If you’re going to have a cardinal serving as your advisor, why not just get him to put his imprimatur on the fund?” (pg. 29) In spite of many obstacles, Ave Maria Mutual Funds would skyrocket. People wanted what they had to offer.

In a nutshell, Ave Maria’s “long-term goal was to change the culture by influencing Corporate America to stop supporting abortion.” (pg. 37) That in itself would be a tall order, a very tall order indeed. George Schwartz’s upbringing and the “power of Catholic education” made him a perfect candidate to work with this type of fund. His childhood work experience, industrious ways, stance on thrift, and serious challenges only enhanced his faith in Ave Maria despite his initial hesitancy to work with it. He begins with a brief historical overview of stocks beginning with the Dutch. He carefully differentiates between reflexive versus reflective judgment and advises that we, “Keep our heads and proceed sensibly.” (pg. 66)

Schwartz is quick to share some basic investing advice and even admits he admires Warren Buffett’s investment strategies. In spite of their obvious differences, he does make it clear that “The idea that owning stock is a valid means of increasing wealth requires that you believe things can get better over time. And that is a fundamentally religious idea.” (pg. 75) He advises us to “be prepared” and refers us to Jason Zweig’s “very savvy check list for investors just starting out.” The list for the acronym “THINK TWICE” is spelled out in detail and he actually recommends taping them to “the edge of your monitor.” In this book you will also learn about stock values (price vs. value), investing, how to evaluate a company, traditional measures of stocks (LV, NPV, PVM), the importance of goodwill, you’ll learn several generalized guidelines to investing, and you’ll learn many other interesting facets of how you can invest and your investments will be “financially astute and morally appropriate.”

The author’s intent and intended audience is made quite clear from the start. Ave Maria Mutual Funds is a Catholic investment fund and has a very strong pro-life stance. George Schwartz impeccably nailed his subject. He stated, in part, that “my intention is to demonstrate how you can get good returns on your investment while avoiding securities of corporations that are engaged in activities contradicting key Christian values—in particular, those that violate core teachings of the Catholic Church.” (pg. xv) This book does promote Ave Maria Mutual Funds, but that fact is quite obvious. I did not find it overbearing as the “sell” was primarily at the beginning and end of the book. The only part I did not care for was a bit of personal political finger pointing, but it did tie in with his investment premise. The audience for this book is quite specific, but if you fit that mold you will find that you can glean a lot of informative information about morally responsible investing in these pages.

Quill says: If you are interested in an excellent overview of a company who espouses morally responsible investing, you’ll appreciate this book.