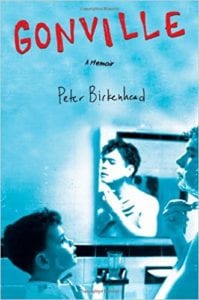 Peter Birkenhead has a memory of flying, flying down the stairs of his childhood home when he was very young. Was he Superman's son? Or was the memory simply something his mind had invented? It wasn't until many years later that he revealed his recurring dream to his mother. She, in turn, confirmed that the event was indeed real, but he wasn't really flying. Instead, she explained, he was being carried by his mother as she fled her husband, and the gun he had pointed at them.

Author Birkenhead grew up in a home with an abusive father and, as he later learned, his way of coping was to forget many of his father's violent outbursts. Perhaps writing Gonville was another way of coming to terms with his home environment.

As the oldest of four children, Birkenhead somehow managed to escape the physical abuse his father raveged on the family. The youngest child, Alison, the only girl, also escaped the sharp hand of Mr. Birkenhead. But all family members endured the frequent emotional outbursts of their father, as the author recounts his father's rantings and abuse with painful detail. The reader is taken on a tumultous journey, from his memory of flying at the tender age of three, to adulthood when he escapes his father's home but not the emotional scars left behind.

The author details a dysfuntional, yet complicated, family life. His father couldn't simply be defined as an incessantly hateful man. "...I hardly ever let myself think of Dad as a bad guy, because when I did I imagined living without him, and when I imagined living without him I imagined not living at all." (pg. 102) Instead, Birkenhead details, "Dad's serious flare-ups..." (pg. 61) while also recounting the sometimes gentle and thoughtful nature of his father as when bragging about Peter's acting talent, "I think he might have a real chance. He's pretty damn talented." (pg. 65) Along with the violence were some truly bizzare behaviors such as the time Peter had friends over to watch TV. While sitting on the couch, his friends' attention was drawn to the kitchen where Mr. Birkenhead has walking, naked, to the refrigerator. To Peter's horror, his father got a drink, burped, farted, closed the refrigerator, turned and left. It's no wonder the author wound up in therapy years later.

Gonville is not an easy book to read. While there is some humor injected into various parts, it is a harsh, no holes barred, look at the lives of a family subjected to the violence of one man. Reading about a man hitting his children is not easy; yet, I found myself wanting to learn more about the family. How the kids learned to change their words and actions whenever they felt their father might get violent, was a learning experience. The kids were silent about the abuse. In fact, it was years later, as adults, that they all finally came together to share their hurt. The first time, it was just Peter and his brother David who traded information; later the rest of the family revealed their traumas. At one point, David was told by his father, "I don't love you and you're not my son." How does any child live with that?

While an interesting memoir, it took me a while to get into Gonville. The first several chapters dealt with Birkenhead's early life, introducing family, neighbors, his love of theater, etc. It tended to wander a bit but eventually settled down and gave an eye-opening look into the world of an abuser. It was heartbreaking to see the abuse cycle continue into the next generation as Peter Birkenhead painfully recounted his striking a girlfriend. Fortunately, he eventually sought out therapy and broke the cycle.

Quill says: A stark, honest look at growing up with an abusive father.