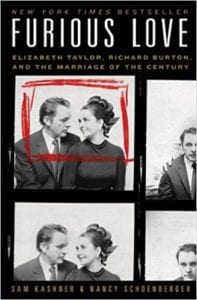 "Richard and I lived life to the fullest, but we also paid our dues." A quote from Elizabeth Taylor, regarding the wild, roller-coaster ride she shared with her one true love, Richard Burton. In the new dual biography recounting the lives of both celebrities, authors Kashner and Schoenberger detail the hot and spicy, and often drug and/or alcohol induced "marriage of the century."

Seamlessly flowing between the lives of Taylor and Burton, the authors delve into the lives of two very strong personalities, Elizabeth with her beauty and charisma, who learned at an early age how to get what she wanted from anybody to Richard, who had a commanding presence on the stage but a weakness for alcohol. At first it seems these two actors had nothing in common and indeed, when Taylor saw Burton for the first time at a pool party, she gave him little notice. This changed when the pair worked on Cleopatra several years later. From there, the couple quickly grew into one of, if not, THE most followed Hollywood duos.

After a brief synopsis of Taylor's first marriages, the book dives right into the pre-production of Cleopatra, and details what Taylor demanded for the movie (where it would be filmed, who would direct, etc.) working its way up to Taylor's electric meeting with Burton. From here, the reader is taken along as the relationship develops. We see the media frenzy surrounding the relationship and Burton's frustration with the press's constant interest. At this point, the authors briefly backtrack to the early days of Taylor and Burton to show how utterly different their backgrounds were.

The meat of Furious Love, details the up and down romance of Taylor and Burton. We learn what drove them together, apart, and intimate details of their daily lives. From little details such as the fact that they never carried money to behind-the-scenes wangling to purchase what would become known as the `Taylor-Burton Diamond' for 1.1 million dollars, we're given a glimpse into this couple's life. While there are sections detailing the incredible excesses of the mega-stars that may make them hard to like, other parts are quite sad, such as how Burton struggled with his reprisal role in Camelot due to his failing health. The slow decline of a once powerful, booming theatrical presence is well documented in Furious Love.

There is a lot of detailed information in Furious Love, and for readers with just a cursory interest in the Taylor/Burton romance, it might be too much. For instance, the book gives a fair amount of back room deal-making surrounding movies. We also learn about various members of the Burton's entourage, and such things as what they paid for a particular boat and then how much they spent to refurbish it. Still, I found the book quite interesting and enjoyed learning how things were done back in the days of the big studio bosses.

Unlike previous biographies, this bio makes use of letters Richard Burton had written to Elizabeth Taylor, released by Taylor to the authors. It is important to note that even with the blessings of Taylor, the authors are quite thorough in mentioning the short-comings of both celebrities (alcohol, drugs, food, etc.) Included among the correspondence is the last letter Burton wrote to Taylor, shortly before his death. In fact, Taylor didn't get the letter until after he had died. What was in that letter? You'll have to read Furious Love to find out!

Quill says: If you're a fan of the Taylor-Burton mythos, then Furious Love is a book you'll greatly enjoy.