From B.A. to Payday: Launching Your Career After College 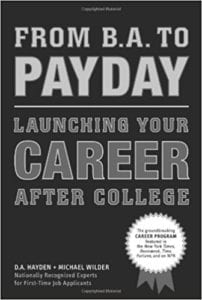 From B.A. to Payday: Launching Your Career After College

There are plenty of how-to books on job-hunting and résumé-writing, but From B.A. to Payday: Launching Your Career After College, is specifically targeted to new or soon-to-be college graduates. Authors D.A. Hayden and Michael Wilder have impressive credentials and work histories in marketing and joined forces to form Hayden-Wilder, a company that helps first-time job applicants develop their own branding message and market themselves to Corporate America.

Their book is well-organized and infused with humor that should appeal to most college students. Hayden and Wilder also do an excellent job of helping readers understand how to use their experiences from past summer jobs or volunteer positions, no matter how menial the work, to highlight important skills that will demonstrate why they will be an asset to any company.

Probably the most valuable chapters are those on networking and interviewing. The authors present a way to set up and maintain a networking database that won’t overwhelm the new jobseeker. The section on interviewing helps the reader decipher the real meaning behind interviewers’ questions and demonstrates how respondents should support all their answers with experiential examples. Hayden and Wilder also advise jobseekers to Google their interviewers before their appointments in order to gather as much information as possible about the person with whom they’ll be meeting; this information can then be used to subtly weave flattering comments into the conversation. However, Hayden and Wilder fail to remind readers to make sure they are collecting information on the correct “Mary Smith,” for example. Imagine how embarrassed you’d feel if you told your interviewer that you were impressed with her outreach work with Sudanese orphans, only to have her tell you that she has never even worked with children. Oops, that must have been another Mary Smith.

Of course, no content on interviewing would be complete without giving advice on how to dress for an interview, and Hayden and Wilder do that well too. Interestingly, while the authors feel it’s important enough to tell readers not to wear jeans (and other questionable apparel and accessories) to an interview, their instructions on what to include on a résumé leave something to be desired. In fact, the section on résumés is where the authors lose some of their credibility. For example, Hayden and Wilder include an Activities/Skills/Interests section on their clients’ résumés and counsel readers to do the same, but including interests or any personal information goes against the current recommendations of most résumé experts. Even more troubling, the authors include rock climbing as an activity on the résumé of an outstanding job candidate. I would argue that most managers and human resource professionals would view an employee’s rock climbing as an activity that could potentially cost the company more in medical insurance claims and premiums, and thus, an applicant with that interest on his/her résumé would likely be excluded from the interviewing process.

Another résumé section that can doom an applicant but that Hayden-Wilder put on their clients’ résumés is the objective statement. The recommendation of most professional résumé preparers, including Martin Weitzman of Gilbert Résumés in New York, is to replace the objective statement with a summary of qualifications. According to Weitzman, the summary “…is your sales pitch. Use it to establish your value by telling people why you're ready for this job and what you bring to the table.”

Despite the shortcomings of the chapter on résumés, there is still a lot of valuable information in this book. More than anything else, it will give readers confidence as they prepare themselves for a job search.

Quill says: This book would make a good gift for any college student.