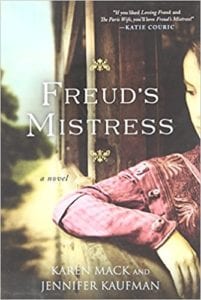 Karen Mack and Jennifer Kaufman have teamed up and produced an intriguing story of the infidelities of Sigmund Freud with (of all people) his little known sister-in-law, Minna Bernays.

Minna Bernays’ life was steadily unraveling. She is unwilling to accept her mundane role of companion to the soulless baroness and governess to her young Flora. Unfortunately, Minna wasn’t the only one dissatisfied with the arrangement. Finding herself dismissed with nowhere to go meant it was time to think about doing something more with her life. But what? She had no money to speak of or many options of where to go. Her father was dead. Her brother lived an ocean and continent away. The mere thought of reaching out to her estranged mother wasn’t worth the fleeting thought she gave the notion. There is one person she has left, however; her sister. Martha was thrilled to have Minna come. Soon, however, Minna would learn the price she would have to pay along with the expectations attached to the ‘invitation’ to stay for a while. Martha had her own set of challenges raising six children ranging from infancy to eight years of age. Her husband was absent most of the time and when he was home, he was often too consumed with his work to engage in familial duties. Indeed, it is a Godsend to have Minna’s help. It’s important to note, however, Martha’s husband isn’t just anyone. Rather, he is the great ‘thinker,’ Sigmund Freud.

The Freud family lived in the Ninth District of Vienna, Berggasse 19. When the coachman pulls up in front of her sister’s home, Minna pauses momentarily and calms the myriad of emotions swirling in her mind. How was it Martha’s life seemed so together; yet Minna continued to struggle with finding her way? Once settled, dinner is served and at Martha’s insistence, Minna must sit next to Sigmund. Back and forth banter of their reunion commences and Minna is reminded of her first meeting of this man—long ago when she was engaged to her beloved (and long dead) fiancé, Ignaz. Sigmund was courting Martha at the time. How was it that such intensity can be awakened with nothing more than his presence next to her? For the first time in many years, Minna feels alive. What she doesn’t realize is the price she must pay in order to maintain a life with some sort of happiness attached to it.

Karen Mack and Jennifer Kaufman deserve an ample dose of ‘bravo’ in their delivery of Freud’s Mistress.Before reading this work of ‘fiction,’ I must confess the scope of my knowledge of Sigmund Freud was his rivalry with Carl Jung! This dynamic duo has written a quintessentially intriguing novel. They detail the complexities of sibling rivalries subliminally throughout and zero in on the target of the coveted prize of the sought after husband—the woman who has him cannot stand him; the woman who wants him, cannot ever have him...completely. There is an abundance of Vienna scenery depicted in both summer and winter ranging from gloriously sunny summer days to withering and dismally grey winter months. The essence of capturing the scenery through precise word placement had this reader living in the moment on many occasions. Without imparting too much of a spoiler, the egregious injustice Minna experienced left me conflicted at best. On one hand, I struggled with the notion that this woman even considered a tawdry affair with her sister’s husband of all people. On the other hand, however, both Mack and Kaufman created the nuance of the cerebral cad Freud could often be to satisfy his own desires. There is heartache and there is hope. Throughout this story, however, there is self-righteous dignity to want (and have) individual happiness. Superb job Ms. Mack and Ms. Kaufman! I look forward to your next book.

Quill says: Freud’s Mistress is a bittersweet and engaging read about the life and times of the most complex ‘thinker’ of all time. It is a difficult story to put down until the last page has been read.