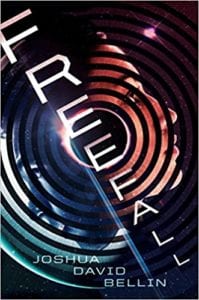 This fantastic new sci-fi/fantasy YA book most definitely sounds like the 'real' world right off the bat. From the very beginning, readers learn that the upper 1% of Earth - the privileged, if you will - are going to abandon planet Earth. Yes, Earth has been absolutely devastated and the only ones who will have to stay on Earth (now called: the Lowerworld) are the lesser beings who are most definitely rejects and certainly not good enough to colonize the pristine new planet with the 'upper crust' citizens. But love...can change everything.

In the Lowerworld, a video is created that crosses paths with the main character of this book, Cam Newell, and his two best friends, Adrian and Griff. These guys are spending their days in Colonization Preparation - doing things that are getting them trained and ready to make the new planet their home - when one of them hacks into a server and comes across this video. The Lowerworlders are basically protesting. They say "Otherworld Colonization," which is what only the top 1% of the populace gets to do, "is a right NOT a privilege." (Sound familiar?)

But it's not so much the words that call out to Cam; he becomes entranced by a girl on the video who he believes is talking directly to him. This is a girl "with golden eyes" who pierces his heart and buries herself in his soul. Her words, her beliefs - they open Cam's eyes to the unfairness of what's happening all around him.

But even understanding won't stop the battles that are coming. One thousand years in the future, Cam wakes up in his pod (that was supposed to 'shoot' him to the new planet) to find that he is all alone. He is trapped on a completely unknown planet that has its own hostilities and may just point their anger directly at him. Will he find Sofie again? Did he do something one thousand years ago that brought about this complete failure? Did his love for Sofie somehow sabotage humanity? You will have to read to find out.

The sci-fi/fantasy aspects of this tale are awesome. But most readers will also note that a great deal of the foundation of this tale is still very much happening in our own world in 2017. This author has managed to address social and cultural issues that we, as Earth's citizens, have been dealing with and fighting about since the beginning of time. And even though we have changed in some areas and grown in others, with each new decade bringing about more understanding of other cultures, there are still too many out there who will never fully accept the fact that there should never be a 'Lowerworld' and an 'Upperworld:' there should just be one world where everyone is offered the same chances at happiness and success.

Quill says: A great story that offers fun and fantasy, while teaching a moral path.