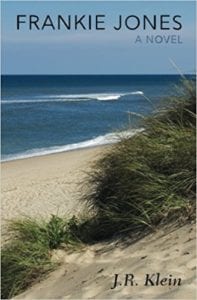 J.R. Klein's thought-provoking debut zeroes in on a young man's search for happiness.

Frankie Jones is your atypical sort of guy. Frankie's life takes a drastic turn when by age nine he is sent to an orphanage soon after his mom's unforeseen death. Released from the orphanage by age sixteen, Frankie is fortunate to land a job in a diner, as well as meet Cecil, the diner's short-order cook. A deep relationship between Cecil and his wife Betty develops, and for the first time Frankie is certain that this is what family must feel like. Over the next many months, Frankie accrues enough cash to travel around the world. Leaving his cushioned environs, Frankie explores the seven continents for the next two years. By age eighteen, Frankie is already a well-rounded individual—having been shaped by street smarts, massive amounts of reading, learning a couple languages, as well as a multitude of worldly experiences. But upon his return to the states, Frankie learns that Cecil has died and his family, broken.

Restlessness seizes him and Frankie heads from Saint Louis to Chicago. Despite his lack of high school credentials, Frankie convinces a Northwestern University dean that he is college material. His journalism degree lands him a job at the Chicago Tribune. Restlessness seizes him again and Frankie makes his way to Boston working for the Boston Globe. It is there that he meets Mercedes Brewster, a woman whose background is diametrically opposed to Frankie's lackluster familial upbringing. Nonetheless, the two fall in love, but obviously not enough for Frankie to stay when restlessness creeps in once again and he heads off to San Diego—this time working for the San Diego Sun. Frankie develops a close relationship with Owen Brooks, one of his working buddies, and starts a new romance with another woman. Although there are memorable moments, Frankie can't help but reflect on his life, especially the unresolved conflict from the one true love of his life—Mercedes Brewster.

Klein presents a story that touches on many facets of the human condition. Keeping to a slow-moving pace, the overarching plot theme calls attention to a person's hopes and dreams for a better life and this constant yearning for greener grass. In the case of Klein's principle character, life hands Frankie a box of lemons. Yet somehow, someway Frankie manages to turn the bitter fruit into lemonade—at least it appears that way. Everything about Frankie's unfortunate familial beginnings statistically dictates that he should be poor, uneducated, and struggling to survive. Yet he defies that stereotype. What Frankie represents is the American poster child who believes that if he works hard enough, he will succeed—a common belief that is not only tightly woven into the concept of the American dream, but also inherent in every single person that calls the US their home.

There, however, is another side to Frankie, and yet another human issue that is difficult for people to face. Calling it the elephant in the room more specifically, this human condition fears the past laced with the ugliness of human error and a flurry of unresolved conflict. Those who choose to face these fears understand that going there creates peace, freedom, and ultimately a deep sense of happiness. Obviously, Frankie is not there and he gets challenged to do so in one form or another. Using Frankie as narrator, Klein's plot displays a man who does an immense amount of philosophizing, and rightfully so since Frankie is a relatively young man who still has many unanswered questions about life. Frankie is only one in a relatively small but highly defined cast. Klein sets his inimitable characters within a balanced mix of aptly clichéd and totally un-clichéd yet tense scenes that incorporates engaging dialogue sprinkled with romance—all of which slowly leads up to one surprise ending.

Quill says: A stunning debut, Frankie Jones is a must read by all.